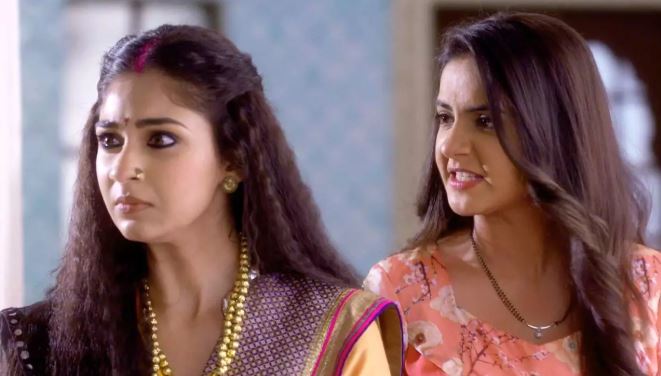 Chakor has landed in mental asylum, as she has failed to prove Imli’s existence. Imli celebrates her victory and feels she has defeated Chakor forever. She dresses like Imli Devi again. She returns to her old avatar. She gets happy to win over Chakor finally. She feels her plan was the ultimate one, which Chakor couldn’t crack. She says I got the haveli in my hands, Chakor’s life has become a hell, I will make Saanvi a bandhua and also everyone else in this village, Aazaadgunj will be ruled by Imli Devi once again. Imli laughs loud. She gets a shock when she hears a lullaby, which Chakor used to sing in childhood. She gets moved when Chakor comes in front of her and appears normal. Chakor holds Imli and sings the lullaby further to infuriate Imli.

Imli asks her what is she doing here, how did she come back from the mental asylum. Chakor tells her that she has come to remind her crimes and punish her. She says I will remind you what all you did against me, you have tried to kill Suraj and me by joining hands with Karan, you have wrecked up our lives by planning the bridge fall down, you tried to take disguise and fool us to make Saanvi your bandhua, then you have turned into a ghost and disturbed me, you challenged me to break off my relation with Suraj. She says you have done so much, and even then you lost, I m Chakor and I never lose.

She reveals the madness drama, which she did to trap Imli. Imli doesn’t believe that she has lost. Chakor asks Imli to accept her failure. She says I m elder to you and also have more experience, you will always be younger to me. Vivaan scolds Imli for attempting to kill him. Imli sees them together and tells them that Suraj will never believe them, Suraj and Chakor’s relation will be ruined. Chakor asks Imli not to worry for Suraj and her marriage. Imli angrily goes to stab Chakor. Suraj makes an entry and gets shocked on seeing Imli. He saves Chakor’s life. Imli tells them that she will kill all of them, she will ruin them. Suraj hits on her head and faints her. They tie up Imli to get her in control.