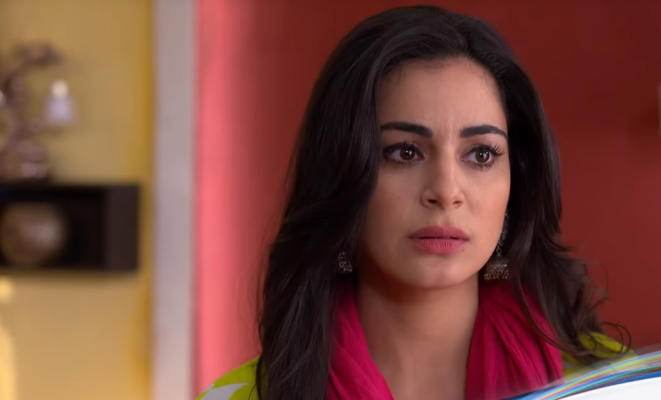 After Prithvi proves that he has bought the necklace for Preeta and shows the receipt, Preeta feels guilty and apologizes to him. Karan and Rishabh apologize to Sherlyn for doubting on her. Kareena asks her to forgive them. She scolds Preeta for the happenings and says you would have asked Prithvi when you got that necklace and says Sherlyn’s character was questioned because of you. Sherlyn asks Preeta not to humiliate her again. Dadi tells about Mahesh and Rakhi’s 25th marriage anniversary and invites Prithvi. Sherlyn asks Dadi to invite Preeta. Dadi says Preeta is a family member and is equally dear like Karan and Rishabh.

Karan tries to inquire about Prithvi and Sheryln’s relation and checks in her phone. He sees Prithvi’s number in the call list and thinks Sherlyn had already informed Prithvi that we will question him. He determines to stop both marriages. Rakhi calls Sarla and invites her family. She tells Sarla that may be Sameer and Shrishti are in love.

Sarla says she doesn’t think so. Rakhi plans to make them confess their love. Sarla checks them and sees them fighting with each other. Karan calls Shrishti and asks her to come to meet. He says you are smarter than Preeta. He decides to show the call list to Shristi.

Shrishti tells Preeta that she believes Karan and is sure that something is going on between Prithvi and Sherlyn. She tells that she got doubtful on them a couple of times. Preeta says you started talking like Karan and asks her to keep her nonsense with her. Karan gets upset and tells Preeta that Shrishti is more smart and intelligent than her, and says you have sworn not to see Prithvi’s truth, since you have so many fears. They get into an argument.