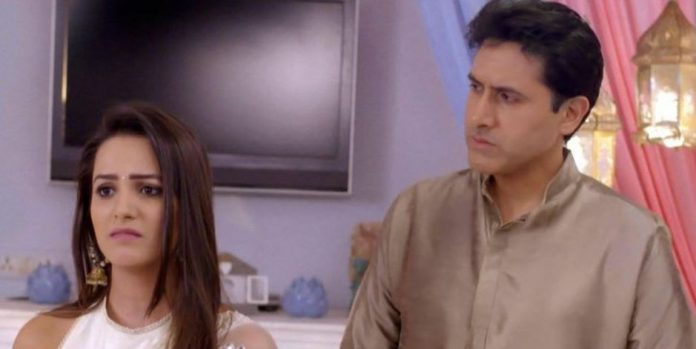 Shagun doesn’t want Aaliya to follow Ishita. She asks Aaliya to remember that Roshni has snatched Adi from her and now she is snatching her rights and status in Bhalla house. She asks Aaliya to open her eyes and learn the facts right. She gets angry on Roshni. She insults her right in front of everyone and calls her baby illegitimate. She asks Roshni if she has any shame to enter Aaliya’s house. Ishita defends Roshni and tells Shagun that the baby didn’t harm anyone, if they feel the baby is wrong, then they will make a leave. Shagun loses her cool. Aaliya asks Mani to take away Shagun. Roshni feels sick by the shocking drama. Aaliya asks Shagun to make a leave. Aaliya feels sorry. She makes an apology to Roshni. She gets heartbroken. She feels none will trust her after Shagun’s doings. Ruhi apologizes to Aaliya for blaming her. She thanks Aaliya for taking a stand for Roshni.

Aaliya tells her that she is concerned about the baby. She has a motive to snatch the baby from Roshni. Parmeet asks Raman if he has any answer now, when Shagun is exposed. He asks Raman to make an apology to Simmi and him, as they are innocent. He asks Ishita to stick to her ethics and get Shagun arrested. Romi feels Parmeet is right this time and tells them that Shagun should get arrested. Raman asks Romi not to support Parmeet. They get into an argument over Parmeet. Romi tells Raman that he is fed up of his double standards. He feels Simmi was doing right, as she is also fed up of the family drama. He tells them that he wants his share, he wants to part ways with the family. He gets insulting Raman, which infuriates Ishita. Romi tells them that he will support Simmi and Parmeet. He insults Roshni for snatching their lawful share by using the illegitimate child.

Roshni faces much humiliation. She tells them that she will not live with them, she doesn’t belong to their house, where everyone hates her, but she can’t tolerate her baby’s insult, who isn’t at fault. She tells them that they aren’t the baby’s family and its proved today. She takes a stand to protect her child. She requests Ishita to take her home. Ishita supports her. She tells Raman that she is taking Roshni home. Raman gets frustrated over the family issues. Everyone in the family gets upset after Roshni leaves. Raman promises that he will sort his issues with Romi and also get Adi’s child home. Ishita looks after Roshni like before. Raman meets Ishita with a request. Ishita tells him that he can’t let him meet Roshni, she doesn’t want Roshni to get more stress. She feels bad that Bhallas don’t intend to get Roshni home, they have humiliated her enough.

Raman asks her how can he guarantee about others. She tells him that Roshni was lonely there in everyone’s presence. He feels she is doing wrong. Mani reprimands Shagun for risking Roshni’s life. Shagun apologizes to him. He tells her that her behavior can’t be justified. She feels Aaliya should get all the happiness, Roshni doesn’t deserve all this. He asks her not to harm Adi’s child. He forgives her. Ishita asks Roshni not to worry about Bhallas. Roshni asks her if Raman got convinced easily. Ishita tells Roshni that Raman won’t risk her life, he won’t take her home knowing it won’t be good. Parmeet plans Roshni’s kidnapping to frame either of Romi or Shagun in the crime.