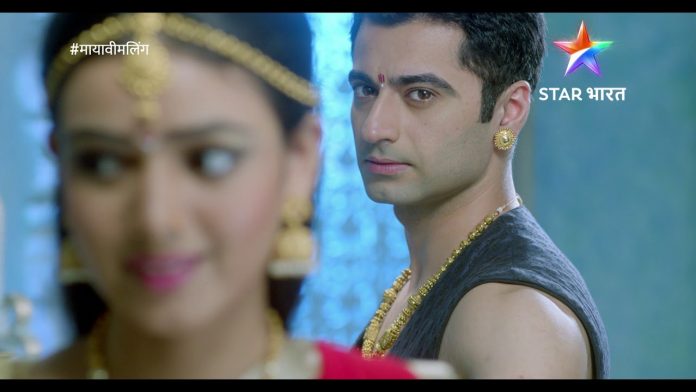 Eshwarya and Chegu reach Maling Rajya on time and inform Shil Aditya about Madhumali’s existence. Eshwarya tells Shil Aditya that they are falling in some big trap set by Madhumali, which means that even Angad is involved in the conspiring. Shil Aditya realizes that they got too late. He wonders how to stop Angad’s coronation ceremony, when he has taken all the steps and completed the rituals to get the Maling throne. He decides to do something and stop the coronation. Shil Aditya takes the crown for Angad. Madhumali and Angad rejoice seeing their victory so close. Shil Aditya pretends to faint down, which gets realized by his family. Vaidehi and Pranali get clueless knowing Shil Aditya has faked illness.

Shil Aditya reveals the truth to his family, who get a huge shock. He decides to crown Pranali instead Angad. He plans to divert Angad’s attention. Angad learns that Pranali has got kidnapped.

Shil Aditya plans her kidnapping for a secret motive. He instructs Haran to abduct Pranali and get her for the coronation. Haran follows his command. Shil Aditya asks Pranali to become Maling’s Queen and take her rights on the throne, as he regards her equal to a hundred sons. Pranali gets emotional and agrees to abide by his advice. Soon, the coronation ceremony begins in family’s presence. Angad suspects when he is kept away. He rushes to his room and uses his demonic powers to learn the matter. He learns about Pranali’s coronation and turns raging. What will Angad do next? Keep reading.