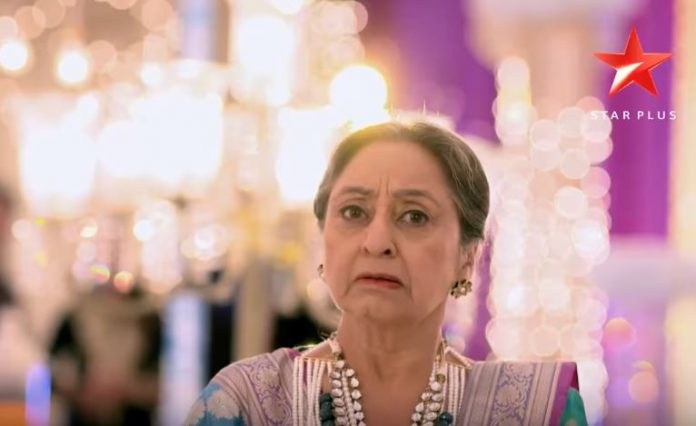 Anika begs to the landlord for a last chance to get money and save her house. The landlord asks her to fall on her feet and apologize to her in order to get some time to arrange money. Gauri doesn’t want Anika to fall in the landlord’s feet, while her aunt asks her to do anything to save them. Anika tells Gauri that her family means everything to her, she will apologize to the landlord and save their roof. Gauri and Sahil ask Anika not to lose her esteem. Sahil faints down suddenly, which makes Anika run to him, rather than touching the landlord’s feet. Anika asks someone to attend Sahil. She tries hard to seek help. Anika and Gauri get Sahil to the doctor and gets him treated. Doctor tells them that Sahil’s state is serious and if he suffers more cold in the rain, he can get more sick. He asks them to look after Sahil well.

Anika and Gauri get Sahil back to their aunt. They have a temporary shade to cover up Sahil and have a roof. Priyanka looks for Anika at her address and finds her gone. She learns the matter. She meets Anika and asks her how did she lose the home, if she didn’t pay the rent. Anika doesn’t like to take money from Priyanka. Aunt asks Anika to get money from Priyanka and clear their loans. Priyanka tells Anika that she has come to offer her a job. She asks Anika to work as her wedding planner. Anika recollects Shivay’s words and doesn’t feel like going to his house for work. She refuses to Priyanka and doesn’t reveal the reason. Aunt gets angry on Anika’s decision. Anika tells Priyanka that she wants to find a roof for her family first. Priyanka offers her accommodation and asks her to come with her to her house, as the servant quarter is vacant.

She thanks Anika for saving her life. Anika feels sorry that she has put Priyanka’s life in risk. Anika tells her that her family won’t like her stay at home. Priyanka assures that her family will support her. She calls Shivay and asks him about getting her friend home. He asks her to do anything she wants and decide on her own. Priyanka tells Anika that his brother has given the nod, she can live with them well.

Anika thinks of saving Sahil’s life by accepting Priyanka’s offer. She hopes that she won’t face Shivay. She tells Priyanka that she will live in outhouse. She doesn’t want to meet or argue with Shivay. Kalyani Dadi returns home and shares her pain with Badi Dadi. She regrets to lose Shakti. She tells her sister that she has returned to attend Shivay’s wedding. Badi Dadi tells Kalyani Dadi that her grandsons gave her equal respect as they love her. Obros get happy to get their favorite Dadi back. Dadi gets tons of gifts from London. Anika and her family reach Oberoi mansion, along with Priyanka, and find the house very big and luxurious. Priyanka introduces Anika to Dadi. She tells Dadi that she wants Anika to see her wedding arrangements. She wants to manage everything on her own.

She tells Dadi that she has decided to accommodate them in outhouse. She tells Dadi that she has asked Shivay about it, and there is nothing to have a second thought. Anika, Gauri, Sahil and aunt settle down in the outhouse. Anika looks for Sahil’s medicine. Aunt gets happy to have a stay in a good place. Sahil stays sick. The power failure occurs, which makes Anika step out of the outhouse. She goes to ask Priyanka and gets to see Shivay. Khanna finds Anika at home and wonders why did she come. He doesn’t want Shivay to see Anika. He gets scared of his reaction. Anika goes away to check the fuse box. Shivay misses to see her once again. Shivay gets some sound from the outhouse and asks Khanna who is living there. Khanna has no idea about Anika. Dadi tells Shivay about Priyanka’s friend living with them. Anika tells Khanna that Priyanka has got them home by insisting her.

Khanna tells her that Shivay will get too angry on seeing her. He reminds her whatever happened at the hospital. She tells him that she is managing Priyanka’s wedding and she has to work there, but she won’t live close to come across Shivay. She decides to leave the place as soon as possible. Destiny brings them face-to-face again. Shivay questions her about entering his house at night. A new misunderstanding gets created. Priyanka solves the matter for them.