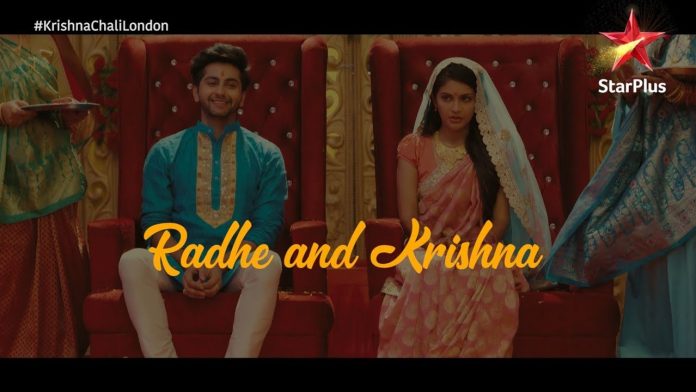 Radhe and Krishna return home. Shukla and his wife criticize Krishna. Krishna faces the insult again. She tries to defend herself. Radhe’s mum clears that she is just Radhe’s mum, not hers. She asks Krishna to know her limits and not teach her. Krishna feels bad by their behavior. She finds Radhe upset. She understands his sorrow. Radhe doesn’t speak up. Krishna helps him and tries to lessen his sorrow. Radhe meets Saajan and tells whatever happened at Dubey house. He feels bad that Shukla has insulted him in his in-laws, which has tarnished his image forever. He regrets for whatever happened. He tells Saajan that his dreams broke and Shukla isn’t understanding. He doesn’t want everyone to disrespect him. He tells them that Krishna’s family gave them much respect, but Shukla ruined everything.

He feels embarrassed to face Krishna. He tries to keep everyone happy. He feels he is failing to keep Krishna and his family happy. He stays depressed. Saajan can’t see him upset, as Radhe always stays happy and smiling. He meets Krishna and tells her that she is the reason behind Radhe’s sorrow.

He vents out anger on her and asks her not to disrespect Radhe’s feelings. He tells her that Radhe loves her madly and can do anything for her. He asks her to know Radhe’s heart for once and acknowledge his goodness. Saajan tells her that Matuk had made the bike demand in front of Dubey, it wasn’t Radhe, but now its Radhe who is heartbroken and beaten up. He asks her not to misunderstand Radhe and know his worth before its too late. Krishna feels sorry for Radhe. She finds him crying and cries too. She goes to sympathize with him. She decides to get a bike for Radhe and fulfill his dream some way. She gets equally hurt seeing Radhe’s tears.