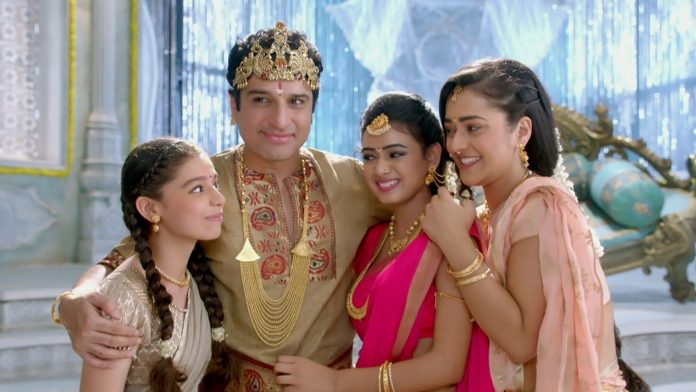 Eshwarya thanks Dharani for letting her meet Chegu. She shares her wonderful experience of having a sky ride with him. Dharani criticizes Chegu and scolds her for intending to marry him. She asks Eshwarya how could he cheat her by taking Adhivanth’s name. Eshwarya denies to know about Adhivanth. She clears the confusion that she loves Chegu and intends to marry him. She gets a shock knowing Dharani has taken her marriage proposal for Adhivanth. Dharani asks Eshwarya not to act ignorant, as she has agree for the relation as well. Eshwarya tells Dharani that she went to talk to Adhivanth about Garima. The confusions get increasing between them. Dharani gets disappointed with Eshwarya for playing games with them. She finds Chegu worse than their servants. Eshwarya sheds tears when Dharani refuses to accept Chegu for Eshwarya.

On the other hand, Garima tells Arak about the magical potion stolen from Pranali’s room. He gets worried as Kalindi made him steal the potion. He runs away from Garima’s sight. Garima understands that he knows something about it and looks for him to know the truth. Dharani stops Shil Aditya to talk about Adhivanth. He tells her that he has bigger problems to acknowledge and solve. She learns that Pranali has lost the potion. He doubts that Angad has stolen the bottle. Pranali tells him that Kalindi instructed Arak to steal the bottle. Kalindi gets confronted for the same.

Madhumali/Kalindi denies to know anything about the blame and calls Arak a liar. She gets blaming on Angad and his brothers. She asks Pranali not to get befooled by Mahapuram princes. She encourages Pranali to find the truth. Adhivanth and Arak get angry on Kalindi for blaming them. Shil Aditya tells Pranali that this ritual was the last one and now he can’t get the potion for her. He prays to Lord to help out Pranali. He asks her not to discuss anything with Angad. He asks Pranali to do something and get access to the throne, else the Maling lake will be converted into a poisonous one. Angad tells Madhumali that he has taken the right risk and now he is sure to snatch the throne from Pranali. He keeps Haran alive, locked up behind the ice walls. Haran shouts for help and wishes Maling princesses reach him. Shil Aditya finds a way to catch Angad red-handed in the crime.