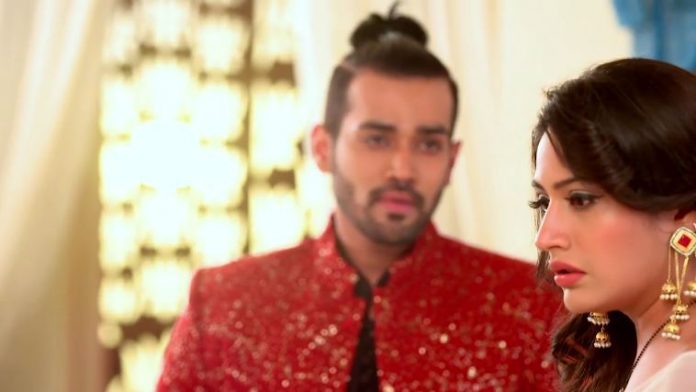 After a moment of unspoken love between Shivay and Anika, they realize their wounds and do the needful aid. Priyanka does the aid to Shivay’s wound. She gets busy on a call. Shivay fails to do the aid himself. Anika helps him out and asks him to care for his wound. He asks her to think of her wound. They both realize they can’t see each other hurt. Their silent love and eye-stares go on. Shivay asks her to apply haldi lep to her wound as well. Priyanka asks Daksh to consume the shagun sweets and come home on time. Daksh eats the sweets on her saying. He falls sick as per Anika’s plan. He tells Priyanka that he had the sweets just for her sake. She realizes that he has fallen ill and has terrible stomach ache. She informs Shivay that Daksh may not come in the puja. He tells her that its utmost important for fulfilling the rituals. He tells Guru ji that Daksh will come on time, as he has sent a doctor home for treating Daksh.

Anika worries that Daksh may recover in time and come for the puja. She doesn’t want Daksh to complete the puja rituals. Shivay asks Khanna to ensure Daksh’s recovery and get him home. Anika reaches Daksh’s home and finds Khanna there. Khanna tells Shivay that he is getting Daksh soon. She goes to empty the fuel tank so that the car doesn’t start. She works hard and empties the fuel. Daksh gets in the car. The car stops at some distance. Anika feels Daksh will not be able to reach home now. Shivay gets informed and asks Khanna to just get Daksh by some way. Tia informs Shivay that they aren’t getting any cab as its raining heavily. The family worries as Daksh won’t be able to make it on time because of rains and traffic. Anika comes home and feels bad seeing everyone tensed.

Shivay asks Tia to reach soon before the mahurat time passes. Anika wishes Priyanka’s sorrow is short-lived. She wants the mahurat to end soon. Shivay assures that Daksh will come on time. Guru ji tells him that puja won’t complete without Daksh, and even the marriage will take place after three years. Anika wants to tell them that its for Priyanka’s happiness. Shivay surprises Priyanka by getting Daksh home. He tells them that he has sent a chopper for Daksh and made Daksh reach home quickly. Tia gets thankful to Shivay. Shivay tells them that he can do anything for Priyanka’s happiness. Dadi hurries for the puja. Daksh takes his place and completes the rituals with Priyanka.

Anika gets disheartened by Shivay’s move. Dadi asks her grandsons to look at the arrangements. She hands over the engagement ring to Shivay. She doesn’t want Priyanka’s happiness to lessen. They keep the engagement ceremony. Shivay assures that nothing will go wrong, he will protect the rings. Anika follows him to get the rings. She hides from him, but he catches her. He asks her why is she hiding. She tells him that she is finding mobile network. Her silly answers waste his time. He keeps the rings safe in his cupboard. Anika tries to steal the rings to stop the engagement.

She wants to create hurdles to stop the marriage. Shivay reaches back to his room. Anika hides from him once again. He gets busy and plans his next work. Anika feels odd and tensed when he throws his phone and comes towards her while looking for the phone. She doesn’t want to get caught. Rudra comes to call Shivay. Anika pushes the phone in their sight to get saved. Shivay gets doubtful about her. He feels someone is hiding. Rudra takes him to Dadi. Anika gets away with the rings. Dadi gets impressed with Anika’s work and pays salary in advance to fulfill her needs on time. Anika gets happy with Dadi’s understanding. She doesn’t want Daksh to ruin Priyanka’s life. She conspires to stop the engagement, and then the wedding. Shivay learns the rings got missing. How will Anika stop the engagement? Keep reading.

Also Read in Tech: Latest Mobile News
| Samsung Galaxy A6 Plus with 24 MP selfie camera gets a price drop in India