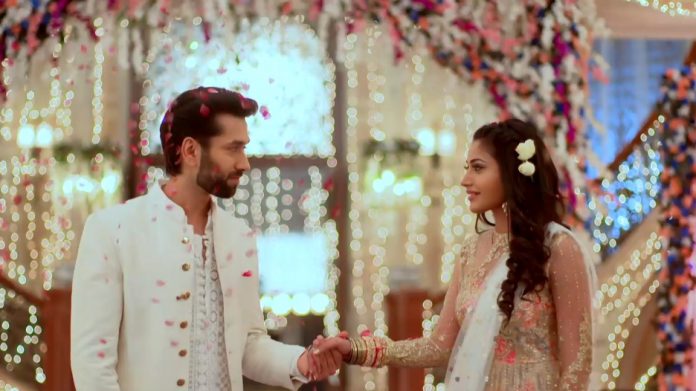 Anika takes the rings to the temple to stop the engagement. She apologizes to the Lord for her move. She doesn’t want Priyanka’s life to get ruined. She finds Shivay there and lies to him. He finds her behavior odd. Anika feels she is doing the right thing. The families meet yet again for Priyanka and Daksh’s engagement. Tia and Shivay compliment each other. Obros tell Tia that Shivay doesn’t like to hug, he is quite low in expressing his emotions. Shivay doesn’t like anyone hugging him. Tia asks them not to tease Shivay. She is happy with Shivay the way he is. Omkara is sure that Shivay will learn how to express love as Tia has entered his life. Omkara doesn’t know that Anika is the one made for Shivay. Anika turns out to be Shivay’s soul mate. They have a hug, unplanned and unexpected. Shivay hugs Anika while trying to hold her when she loses balance again. They have a moment.

Omkara and Rudra spot Shivika’s hug for the first time and get a huge shock. They wonder why is Shivay getting inclined towards Anika. Rudra tells Omkara that it was a clear hug, Shivay wasn’t just holding Anika. He thinks to test Shivay by falling near him. Dadi asks them to stop their nonsense and come for engagement. Shivay goes to get the engagement rings. Dadi asks Priyanka and Daksh to exchange the rings which were placed in the puja. She gets perplexed finding the rings missing. She asks Shivay to manage something, else the engagement won’t be possible. Shivay checks his cupboard for the rings. He tells Dadi that he lost the rings. He gets doubtful about Anika when she fails to hide her doings. Shivay tells them that they will carry on the engagement by some way, without the rings.

Anika gets relieved that engagement won’t happen now. Shivay catches her and scolds her for stopping the engagement like she tried to stop Daksh from reaching home for puja. Anika justifies her that Daksh is wrong, and Priyanka doesn’t deserve such a bad future. He warns Anika against arising problems in Priyanka’s life. He threatens to ruin her life. Anika doesn’t get scared of his words. She feels some connection with him. Daksh asks Anika is she so after him that she is trying to break his marriage. He tells her that he knows that she has hidden the rings to stop the engagement. He asks Anika why does she like him so much. He promises of keeping her heart always.

He tells her that he will marry Priyanka and also spend time with Anika. She scolds him and limits him from talking cheap. She shows her bold side and shocks him. She tells him that she will bash him up if he stoops low. She tells him that she was controlling her anger to keep Oberois’ respect. Daksh gets surprised seeing her never seen before avatar. She tells him that she will break his dreams and stop his engagement with Priyanka. Anika gets determined to defeat Daksh. Dadi asks Shivay if he has got the rings. Shivay figures out Anika’s plans by seeing the CCTV footage. He gets the rings. Dadi asks Priyanka and Daksh to get engaged soon. Priyanka waits for Anika. Dadi asks them to exchange the rings before the mahurat passes off. Shivay finds Anika missing in the engagement. He goes to meet her and confront her for hiding the rings.

He decides to throw out Anika from the house. Nikhil meets Anika and her family. He tells them that he has kept his promise and got his family to talk about the marriage. Anika’s aunt doesn’t show any interest. She clears that they can’t give any dowry. Nikhil’s family tells them that they just want Anika, not any dowry. Shivay meets Anika and gets to see her with Nikhil, while their alliance is getting fixed. He learns that Anika’s marriage got fixed. Shivay tells them that he will talk to Anika later since she is busy with her fiance. He gets hurt seeing Anika with Nikhil. He questions her about Nikhil if she is sure about Nikhil’s character certificate. They both have an argument over Daksh and Nikhil. Shivay tries to get closer to Anika’s life.