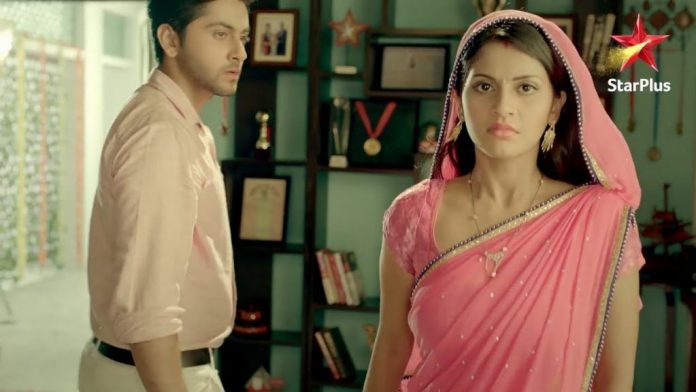 Krishna goes to police station and takes Lali along to get Gajanan punished. She has to stop the injustice happening in Shukla house. Shukla scares Lali and makes her change the statement. Lali lies to the inspector and frees Gajanan. Krishna asks Lali why is she doing this, why is she saving her husband. Shukla tells the inspector that he respects the law a lot, he will never break laws. Lali gets silent. Krishna feels Lali should have shown courage as well. Krishna fails to get justice for Lali. Gajanan goes home with his family. Radhe’s mum attempts suicide as part of her drama. Radhe and entire family tries to stop her. She wants Radhe to support her like always. She is also fed up of Shukla’s tortures. She gets angry on Krishna. Everyone stops her and removes the rope noose from her neck. Krishna believes her drama and cries.

Radhe finds Krishna hurt and consoles her. Krishna says even animals can’t be beaten up, how could Gajanan beat Lali, didn’t you see her state. Radhe’s mum tells her that by doing this complaint, Lali’s future won’t be saved, she didn’t help Lali, but has done much worse. She gets angry when Krishna teaches her values. Krishna says my dad never raised his voice on my mum, these are my values. Radhe’s mum says I understand your values, I have seen Dubey and his status. Krishna doesn’t lose out to their taunts, and starts replying in their own language. Radhe tells his mum that Krishna has done everything for Lali’s betterment. Krishna thinks she has done the right thing as Shuklas are really mad and violent. His mum angrily throws a vase at Krishna.

Radhe catches the vase and protects Krishna. Radhe doesn’t want the family to give tension to Krishna. He gets confused and wonders if Krishna is doing wrong. Krishna explains him that domestic violence is wrong, even if he is habitual to watch such violence at home, he should rectify his thinking and intervene to save the woman. She tells Radhe that Lali has much wounds and he should see her state, Gajanan has done a really bad thing to beat his wife, which signifies that there is no love and respect in their relationship. Krishna doesn’t want to see anything wrong happening around her. Radhe didn’t think that Krishna will get badly treated in the family, as she is much educated, and chosen by Shukla. He felt the entire family will be pampering Krishna. He understands that Krishna isn’t the culprit, and he has to save her from the family’s wrath.