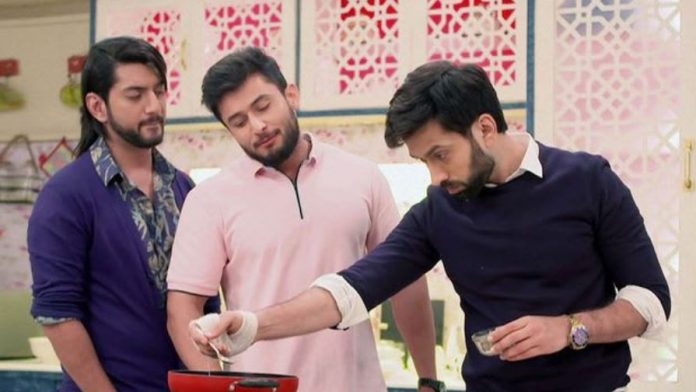 Omkara and Rudra try to find out why is Shivay behaving so weird. They realize that Shivay has feelings for Anika. They want Shivay to admit his feelings before he marries Tia, so that his love story can actually get completed. They want to help their brother, knowing Shivay is not able to speak out his feelings. They make a special plan and spike the drink so that Shivay confesses love to Anika. Shivay consumes the drink. He feels drowsy and goes to his room. He self talks and expresses his emotions. He sees Anika and gives the same drink to her. Anika too gets dizzy.

Shivay hides her in the cupboard when Omkara and Rudra meet him. Shivay doesn’t want them to see Anika in his room. He gets acting more weird. He hides his mistake of giving the same drink to Anika. Omkara and Anika don’t know about Anika and laugh on Shivay’s silly excuses to stick his back to the cupboard. Omkara tells Rudra that Shivay is raising the confusion. Shivay gets nervous to acknowledge his feelings for Anika.

Shivay doesn’t tell the truth to them, and make excuses. He tells them that he is getting cough, but he can’t have water, his heart condition is weak, anything can happen to him if he coughs while having water. Omkara and Rudra show their concern and ask him if he is fine. Shivay says I m getting sweat because of cold. He behaves odd to hide the secret. Next day, Omkara asks Shivay what happened the last night. Shivay doesn’t reveal anything to him.