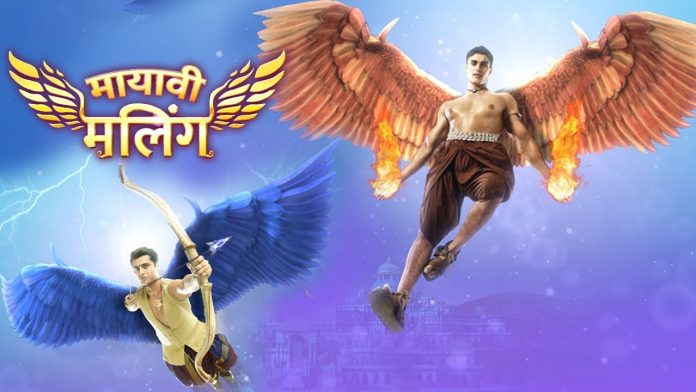 Madhumali comes back to form and attacks on Eshwarya and Garima. She punishes them for interfering in her work. Maharaj Shil Aditya and his wives run to save Garima’s life. Chegu steps in there in time and counters Madhumali’s attack. He saves Garima’s life. Chegu comes as a relief for Malign. He attacks Madhumali by his fire powers. Madhumali is much experienced in handling her powers. She enjoys the fight with Chegu. Angad doesn’t know about Eshwarya’s move to fill in lake water in the arrow and attack Madhumali. Angad shoots the arrow and soon gets to see Marekeyasur in front of him. It gets shocking for everyone to see Angad’s demonic side. Angad greets his real father. He pays honor to his Lord, which shocks Maling. Pranali realizes that she has got married to a demon. She feels miserable and pities herself. Madhumali stays unharmed.

Angad couldn’t control himself from showing his demonic side to Pranali and everyone. Angad tells his dad that he has made his work easy by paying him a visit. Angad gets ready to do anything for his parents. Madhumali and Angad cheat everyone. Maling Rajya realizes that Madhumali is alive and had been tricking them as Kalindi till now. Madhumali orders Angad to control Maling and take over the throne. Angad shows his true colours to Pranali. Pranali faces the harsh reality.

Madhumali wants Angad to defeat the Dev Vanshis. She tells them that Maling Rajya is too weak for her to beat. She enjoys her stay in Maling and ends the hide and seek. She gives time to Shil Aditya to realize his blunders. Shil Aditya feels safe that he didn’t make Angad the king. Pranali thanks Chegu for saving Garima’s life. Eshwarya asks Chegu how did he know about the planned attack on Maling. Chegu tells her that he learnt it by seeing Daanav Vanshis in the palace. He asks Shil Aditya to take action against Angad, even if Angad is his son-in-law. Chegu warns Shil Aditya against the dire consequences if Daanav Vanshis stay back in Maling. They realize that they are badly caught up. Shil Aditya leaves the decision on Pranali. Madhumali and Angad wait for the day when they conquer the world.

Angad tells her that Pranali will always need him to open the secret chamber door, and this way he will plan to ruin the lake by channelizing the protection key with Madhumali. They plan to take advantage of the fact that Angad has done the rituals with Pranali. Pranali meets Angad with a hope to change his heart. Angad reminds Pranali about her suspicion. She asks him about their relation’s future. She doesn’t see any future with a demon and cries.