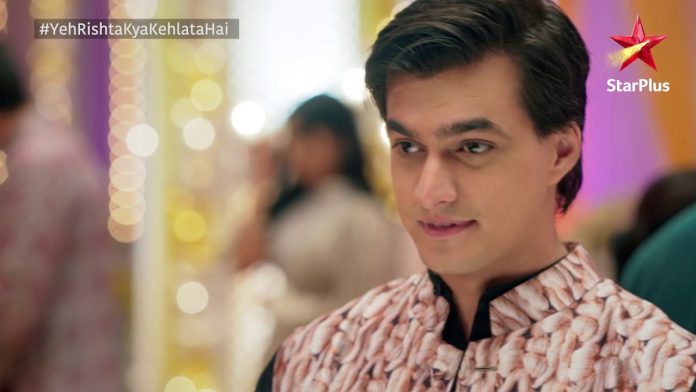 YRKKH: Kartik gets overjoyed by Naira’s disguised act… Goenkas and Singhanias enjoy the Dahi Handi competition. Kartik and Naira take part in the Dahi Handi celebrations. Both families try to avoid themselves. Naksh vents out anger on Kartik once again because of divorce. Naksh and Kartik’s argument goes on. Kartik tells Naksh that its tough for him to avoid Naira. Naksh asks Kartik to just back off from their lives. Naksh, Kartik and Anmol join the team and play together. Naira dresses as a guy and climbs up the pyramid to break the Dahi Handi. Kartik and team try to break the Matki, but Kartik loses the balance. When Kartik falls down, Naira lends him support and saves him. Naira gets slipping down the human pyramid. Kartik holds her in arms. He finds her touch similar. He doesn’t know what to tell her. He assists her and lifts her, so that she breaks the Matki. Naira breaks the Matki. Naira wins the competition and stuns everyone.

Kartik realizes its Naira in disguise and throws a rose at her. Naira understands that Kartik has identified her, when everyone else could not. Kartik and Naira’s true love gets seen by their gestures. They finally realize each other’s worth in their lives.

Kartik and Naira both are very happy with each other’s presence and regular meetings by some excuse. He gets happy to see her and wants to convey his feelings. He goes to talk to her and express his emotional dilemma. Kartik and Naira have a romantic performance in the dream sequence. The family gets surprised knowing Naira is the person who has broken the Matki. Kartik and Naira have an eyelock. They share a cute moment. Kartik feels there is much to express to Naira, but he gets reluctant because of Suwarna, who is also present with the family in the celebrations. Kartik doesn’t want to hurt Suwarna’s heart. Situations bring Kartik and Naira to the same place all the time. Even the families don’t have good terms now. Naksh also didn’t know that Naira will be coming to break the Matki. Naksh also gets a big surprise by Naira’s rocking disguise. Suwarna learns about Naira and gets hugely upset with Kartik’s closeness with Naira.

Suwarna gets enraged with Kartik’s humiliation chapter. She calls up Singhanias to make them clarify for Naksh’s misdeed. She vents out anger on Singhanias in order to defend her son. Naira gets happy to receive a hairpin gift from Kartik. She happily adorns herself with the hairpin, personally customized by Kartik.

Devyaani in return puts the blame on Kartik for not valuing anyone’s emotions and hurting others because of his love confusion. She asks Suwarna to get her son remarried soon, so that he isn’t running after Naira. The divorce brings bitterness in everyone’s hearts. Devyaani and Suwarna’s argument hurt both the families. Kartik and Naira share a moment on the chat and get happy that their terms didn’t turn bitter after their relation’s breaking. Kartik and Naira meet in the Janmashtami function. They have romance in the dream sequence. Kartik and Naira will be seen as Krishna and Radhe, and perform in the Janmashtami celebrations.