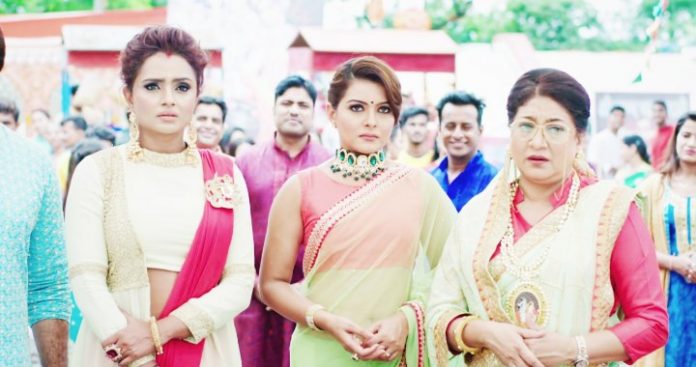 YRKKH: Goenkas’ mixed reactions on Kartik-Ashi’s marriage.. Suwarna and Kartik return home late, which makes the family worry for them. Suwarna tells the entire matter to the family, which leaves them shocked. Manish asks Kartik if he is sure about his remarriage. Suwarna tells them that they have thought well and decided to go ahead with the plan. Naitik and Naksh try to get the best treatment for Naira. They pacify Naira and tell her that she will get fine soon. Naira feels lucky to have such a supportive family. She misses Kartik and imagines him offering support in her life’s tough phase. Kartik asks her not to make him away in such a time when she needs him. She doesn’t want Kartik to get sorrow in his life. She asks Naitik not to tell anything to Kartik. Rajshri asks Naira to let Kartik know, since its Kartik’s right. Naira tells them that Kartik isn’t her family now. Naksh also feels she is right, since Goenkas will misunderstand them.

Kartik recollects his promise to Suwarna. He doesn’t want to move on in life with Naira. Naitik cries for Naira and gets more depressed. The family asks him to stay positive. Naitik tells them that he is breaking down by facing such a big problem. He doesn’t want Naira to leave him. He wants Naira to get blessed and happy. His courage breaks down. He can’t imagine Naira going far from him. They tell him that they are with him and Naira, they will fight together for Naira, they will make Naira win, they can’t fall weak. Naksh tells Naitik that he has got the appointment for Naira’s surgery, they should support Naira. They visit a temple and make Naira do some charity. Naira does the aarti.

Naitik supports her and prays for Naira’s life. He wants to be with his daughter and battle against the disease. Naira gets surprised on seeing Kartik and Goenkas in the temple. Kartik shocks them by giving his marriage invitation card. He asks Naira if she is shocked to know that he has agreed to marry so soon. He tells Naira that he is marrying just because of her rejection. He reveals the bride’s name Ashi. He tells Naira that he didn’t see Ashi as a life partner before. He reveals how Karan refused to marry Ashi and left her at the court, like Naira left Kartik at the temple.

He tells Naira that Ashi also got cheated by Karan, and has agreed to marry him now. He is happy that Ashi understands his situation, being in the same boat. He tells Naira that he is going to marry tomorrow. He asks Naira to attend his marriage and bless the newly weds. He gives her the card and goes. Naira does tilak to the card and sacrifices her love. She wishes Kartik stays happy. Suwarna gets emotional with Naira’s big sacrifice. Naira wants Kartik and Ashi to have a good future. Ashi asks Kartik not to feel bad, they both have a broken heart and need each other. Ashi thanks him for agreeing for marriage. Manish doesn’t think Kartik’s marriage is the right decision. Dadi also feels that Kartik and Ashi aren’t right for each other. They ask Suwarna to stop Kartik’s re-marriage. Suwarna tells Manish that this is necessary for Kartik’s good future.