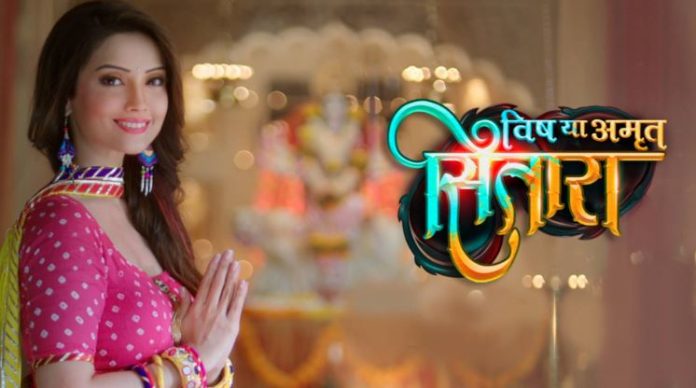 Sitara Viraj and Nethra’s wedding preparations begin. Nethra doesn’t like Sitara, but she tolerates Sitara just because of Maharani’s command. She tries to trouble Sitara, so that Sitara leaves from the job. Sitara gets troubled by Nethra’s sticky notes on her back. She gets humiliated. Viraj sees the sticky notes and removes it. He helps her out. Viraj and Sitara are coming closer. He feels upset with Nethra’s misdeeds. Sitara has to get answers for her big questions. She is also finding her friend Chanda. She goes to the jungle to find Chanda. Sitara falls in big trouble when someone shuts her in the big box. Samrat kidnaps Sitara so that she doesn’t find Chanda. Sitara loses her breath.

Samrat doesn’t want her truth to come out. Viraj saves Sitara from the deadly trap. The saint tells them that Sitara is the Vishkanya and he had chained the box to kill her. He had left a scorpion inside the box as well. Viraj tells them that its all nonsense, there is nothing like Vishkanya. He asks how can a girl possess poison. Saint tells him that the girl will ruin everyone by her evil poison. Viraj takes Sitara with him. He doesn’t want Sitara to become someone’s target. He makes her gain consciousness. Viraj and Sitara’s friendship will go ahead after this point.