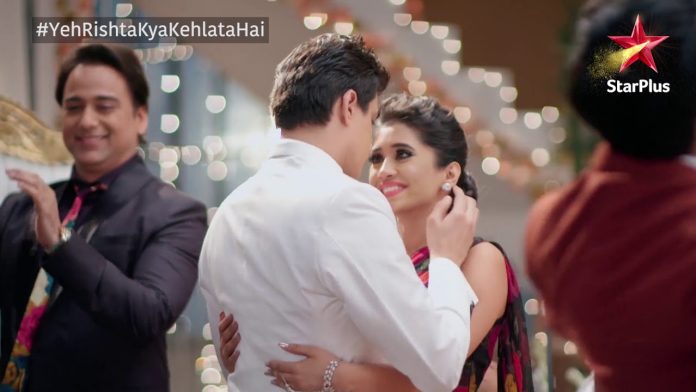 Yeh Rishta Misunderstandings get drawn between Kartik and Naira. Manish finds Kartik too upset and asks him if something is troubling him. Kartik shares his dilemma over the baby’s birth with Manish. He tells Manish how the doctor has clearly stated the fifty percent positive chances regarding Naira’s pregnancy. He fears of losing Naira. Manish understands his fears and concern. He explains Kartik that Soumya has also faced the complications in pregnancy, but every child gets his own fate. He asks Kartik to not think of any wrong thing regarding the coming baby. He asks Kartik to accept this phase as destiny and try to cope up with it with a positive spirit.

He says even if there were less chances in Soumya’s pregnancy, Kartik was born safely and brought happiness in the family. Kartik changes his mind of aborting the child and wishes that baby comes in their lives. He goes to the shop to buy some baby toys. He doesn’t tell Naira and thinks of surprising her. He thinks to protect Naira by good precautionary measures, so that he can assure her good health. Kartik wants Naira to be happy and celebrate the new phase of their life. He doesn’t talk to Naira regarding his change of decision after talking to Manish. Goenkas are happy for the coming baby.

Dadi keeps a special puja for Kartik and Naira. Dadi meets the pandit and asks him about any issues in Naira’s kundli. He suggests her to perform the puja and pray for Naira. Dadi wants to see Kartik’s son. She takes Naira to the temple with her.

She tells Pandit that he shall start the rituals soon, she has got all the items required for the puja. She tells him that she wants Kartik and Naira to have a son, not a daughter. She takes Naira to the temple as well. Naira stays lost over Kartik’s abortion decision. She doesn’t reveal the tensions to Dadi. Dadi wants the baby to be safe. She doesn’t know what matter is hidden from her.

She just stays hopeful to get Goenkas’ heir. There is much tension between Kartik and Naira. Kartik doesn’t want to risk Naira’s life. Naira doesn’t want to lose her baby. Dadi wishes the best for Naira and the baby. She doesn’t know about Naira’s health issues and pregnancy complications. Pandit tells Dadi that he is a medium to make their prayers reach the God, but it will be a result of their good deeds that helps them. Dadi calls up Kartik to attend the puja. Kartik doesn’t sit in the puja. He has no interest in sitting in the puja and praying, since its troubling for Naira. Naira cries seeing Kartik’s behavior.

She stays annoyed and doesn’t talk to him. Kartik tells Dadi that he doesn’t want this puja to happen, even if its for the baby. Dadi tells him that she wants the puja to be done. Pandit gives a Mauli thread for Naira. He tells Dadi that Naira has forgotten to take the thread and left. He asks her to make Naira wear the protection thread after the puja. Kartik is much worried for her and baby.

Naira is hurt that Kartik wants to abort the baby. The puja and Kartik’s impulsive reaction will be creating misunderstandings between Kartik and Naira. Kartik stops the puja just for Naira’s comfort, since she gets troubled by the havan fire smoke. Naira takes his annoyance the other way. Kartik just cares for her welfare. Kartik wants to explain her that he also wants the baby to come in their lives now.