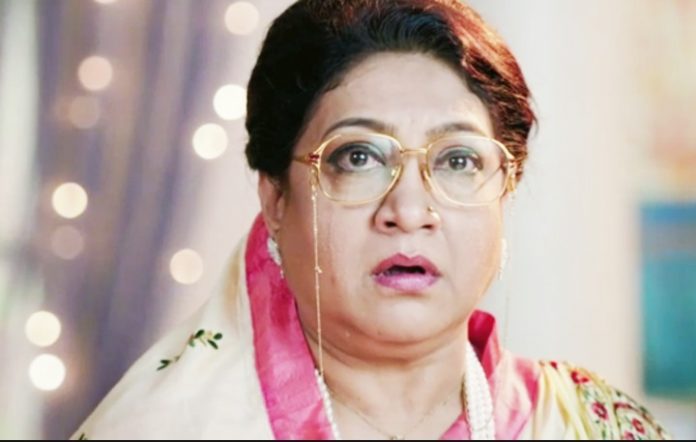 YRKKH Dadi invites trouble once again. Kartik tells Naira that he has thought of buying baby stuff to surprise her. He tells her that he loves the baby a lot and wants to forget whatever happened. He just wants to make a fresh start and bring happiness. Manish and Akhilesh understand Dadi’s emotions and know that whatever she does is right. They want to support Dadi in whatever she is aiming for the family. Manish tells them that they should always agree with Dadi’s decisions. Meanwhile, Naksh tells Kirti that they shouldn’t care for Aditya’s return and just focus on work. He tells her that he isn’t feeling bad for the situation, they have to be strong. She tells him that she has taken her decision, that’s to leave the project. Naksh doesn’t compel her and tells her that he is always with her in her every decision.

Manish is sure that everything will be fine. Dadi is afraid of people’s evil sight catching Naira and the baby. She tells Manish that she wants to make sure that Naira gives birth to a baby boy. Kartik and Naira miss to overhear Dadi’s wish. They happen to see Dadi’s plan of feeding ghee laddoos to Naira.

Kartik tells Dadi that he has already bought the laddoos. They both compete to pamper Naira. Naira wishes someone saves her from their love overdose. Naira refuses to eat sweets. Kirti tells Vaishali that she doesn’t want to work with Aditya. Vaishali asks her not to change her decision because of Aditya.

She advises Kirti to keep personal and professional lives different. She tells Kirti that Aditya has changed now. Naksh tells Vaishali that Kirti will join them. Vaishali and Aditya find Naksh a supportive husband. Naira talks to her doctor and tells him that she wants to have something spicy, but the family isn’t taking care of her choices. Doctor asks her to eat anything she likes. Naira finds trouble knocking when she sees Kartik and Dadi preparing more things for her. She wants to keep Dadi and Kartik’s heart and eats just a bit of their choices. Naksh tells Kirti that they can’t exhibit their fears to Aditya, she should be confident on her work and relations.

He surprises her with his decision to help her continue the project. He tells her that she shouldn’t back out, he is with her. Dadi and Kartik catch Naira having junk food. They also eat the delicious food and come across each other. Naira gets guidance from Akshara’s diary again. She tries to calm her mind reading her mum’s journey of parenthood. Manish tells Dadi that he will take Kartik to office, so that she can follow up with Naira. Akhilesh tries to help Kartik. Manish tells them that there is a reason behind this.

Dadi wants to know about Naira’s child. She contacts a doctor to know baby’s gender. She wants to be sure if its a baby boy. The police reaches that doctor to catch him red-handed for doing the illegal work of confirming baby’s gender. Dadi doesn’t want Kartik to accompany them. She argues with Kartik and sends him. She feels sorry to hurt his heart. She tells him that she is doing everything for him. Kartik has no idea about Dadi’s big move, that could invite much trouble. He stays upset and worries for Naira. Dadi and Naira fall in trouble when the police raids the place.