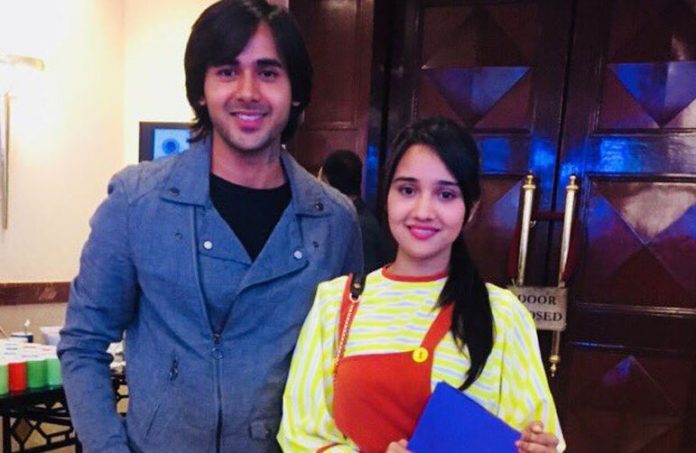 Yeh Un Dinon Ki Baat Hai: Sameer’s family gets successful and breaks Naina and Sameer’s alliance. Sameer feels helpless and cries. Naina looks at him while she is taken away by her family. Vishaka tells Sameer that she will go from there after getting insulted by Naina’s family. Sameer asks her not to go and keeps her bags back. Vishaka agrees not to go, on a condition that he will not take Naina’s name again. Tai ji tells her family members that if this is their way then this alliance is over from our side too. Naina looks on shocked with teary eyes.

Roop: Roop and Ishika give courage to Purvi to fight with Ranvir and punish him. They take her to Patel Nivas as Shamsher asks them to go. Purvi asks Roop and Ishika what to do. She is very much scared of Ranvir’s doing. She asks Roop what to do? Roop says how do we know? Ishika says we don’t stay at this side of the house and says you might know what has happened with you and how you shall reply. Ranvir tells Purvi that if she trusts foolish and stupid people then this will happen only and tells that Roop’s blood is a bit cold. Ishika slaps him and tells that Roop’s blood is not cold, but he is silent because of the relation which they share.

Ranvir picks a bottle to hit Ishika, but Purvi hits him with that bottle. Ranvir is shocked. Roop and Ishika are happy that Purvi has realized her strength. Purvi warns Ranvir. Ranvir gets furious. Roop and Ishika tell Ranvir that they are with Purvi and if anything happens to her then they will not leave him. Ranvir plots Ishika’s kidnapping to take revenge.

Tujhse Hai Raabta: Malhar takes Kalyani to Mumbai with the intention to catch Sampada and Atharv and to fail Kalyani and Anupriya’s conspiracy to help them escape again. He misunderstands Kalyani and thinks Atharv and Sampada must be in the same nursing room from where Anupriya called. Anupriya gains consciousness and asks for water. She hears Sampada crying on the other side of sharing room and tries to go there to console her without knowing she is Sampada. Sampada cries badly and thinks of Atharv and her struggle to live with the financial crisis. She feels Atharv is giving least importance to her and doesn’t care for her anymore. Malhar and Kalyani celebrate Makar Sankranti before. They fly kites and get happy when they cut the other kite. They happily hug. They come close during the festive. They fly the kite of romance. Love gets in the air for them. Malhar prepares sweets for Kalyani with love.

Kumkum Bhagya: Abhi asks King to leave Pragya and then makes an excuse and changes his words. King recalls Chachi’s words and asks Abhi if he has come before him. Abhi says I was here before you and you came after me. King asks him to go as he has come. Abhi says it is not necessary that I shall go as you have come here. King gets doubtful. Abhi tells him that he will stay there till Kiara gains consciousness and talk to him. Purab and Disha collide with the nurse and the DNA sample falls down and rolls towards Tanu. Tanu smiles looking at their tensed faces.

Kundali Bhagya: Monisha asks Judge to give death punishment to Rishabh for killing her Rithvik. Karan gets furious and grabs her neck. Judge asks him to leave her and says it is contempt of court. The judge is about to give a verdict against Rishabh. Prithvi is all happy and confident.

Tara and Upasana get into a fight. They both want to kill each other. Virat stops them. Tara tells Virat that Upasana was trying to kill her. Virat vents anger on Upasana and defends his sister. Tara tells him that she wants to find Mr. X and his secrets. Virat tells Upasana that he will never tolerate anyone hurting Tara. He points the gun at Upasana. He threatens to kill her.