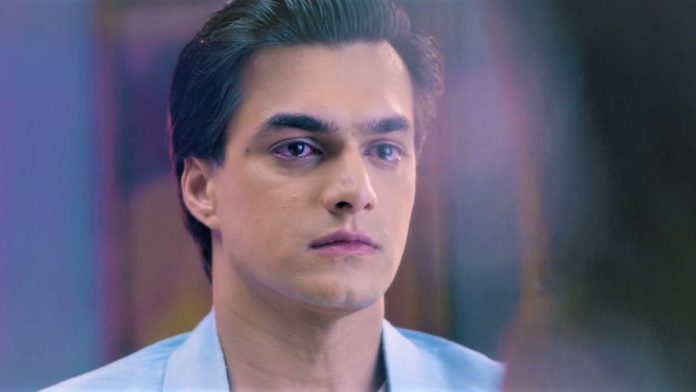 Yeh Rishta Unthinkable twists Kartik gets to know the complications faced by Kirti. Doctor suggests him to sign the consent form so that they can take Kirti for her delivery. Kartik runs to complete the formalities. He then learns about Naira’s critical state. He asks the doctor to let him meet Naira. The doctor tells him that Naira is admitted because of pre-mature labor pain. Kartik says Naira is my wife, let me meet her once. He requests for Naira’s proper delivery. Naira gets stressed and panicking for Kirti. Kartik doesn’t wish to tell Naira about Kirti. He didn’t wish Naira to learn about Kirti this way. He tells Naira that he wanted to share the accident truth with her, but didn’t tell her since he was afraid for her and their baby. He feels he has failed to keep the promise to Dadi that he will protect Naira and Kirti.

He knew she will initiate labor pains if she learnt this shocking news. He doesn’t want any problem to come during her pregnancy’s last phase. Naira cries in pain and loses courage. She has Kartik by her side, who keeps on encouraging her. Kartik never imagined that he will face such a day, to see both his sister and wife in deep trouble.

Elsewhere, Dadi gets jitters with the thought that Kirti is facing the affect of Markesh. She doesn’t want Kirti to leave them forever. Dadi prays for Kirti’s long life and is hope that her worship will get fruitful. Dadi and Naira’s strong intuition about the danger on Kirti prevails further, causing much tensions.

Nurse goes to inform Kartik. She congratulates Kartik and tells him that its a baby boy. Kartik gets delighted and thanks Mata Rani. He tells the nurse that he was praying for Naira and Kirti ever since he has sent them to the theatre for surgery. He gets too emotional. He thinks Naira has given birth to a baby boy. He receives the good news with much enthusiasm. The twist in the tale comes to strike Kartik. He learns that the baby is delivered by Kirti, not Naira. He learns about Naira’s miscarriage. Naira gets conscious and looks for the baby beside her. She finds an empty cradle. She gets a big shock and shouts to Kartik to know the truth. Doctors try to calm down Naira and give her an injection to put her to sleep. Naira wants to know where is her baby. She wants to get answers from Kartik.

Jiji Maa:
Suyash scolds Falguni for reviving his wounds. He sees Falguni taking care of Uttara. He asks her how did she forget that Uttara has tried to kill their child many times. He says its your habit to go against me and hurt my emotions. Falguni asks him to understand her. She tells about Uttara’s mental imbalance. She wants to tell Suyash that she couldn’t leave Uttara in this state. Suyash has hatred for Uttara too. Falguni fails to explain him.

Meanwhile, Suyash faces new issues planted by his enemies. Suyash gets trolled on social media when he declines the labor union demand. The workers troll him. Falguni feels sorry for Suyash. She learns the troubles he is facing. Suyash hates Falguni and also poor people. Suyash is not believing the poor people and has a problem with them, just because of Falguni’s cheat. He doesn’t want to help the workers. Falguni is in tension. She wants to solve the mess.

She heads the labor union and feels Suyash is really at fault. She calls up Suyash to meet. She wants to alert him and asks him to fulfill the labor union demands to have a balanced work functioning in the factory. Suyash doesn’t answer her calls. Falguni wonders where did he go that he got unreachable. She worries for Suyash’s safety. Laddoo finds her crying and tries to cheer her up. He dances for her and asks her to smile. She then learns about Suyash’s kidnapping.