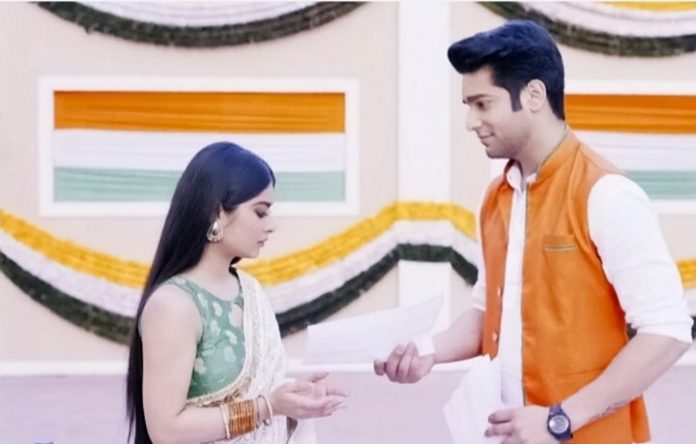 Yeh Hai Mohabbatein Suspicion drama. Ishita, Shagun and Bala get Raman treated. Shagun helps them by getting a permission to meet Raman. Inspector doesn’t want them to meet Raman at once and sends just Ishita inside the ward. Ishita feels bad seeing Raman. She wishes him to recover soon. Raman gains consciousness and asks her the series of events that happened. Shockingly, he gets to see himself on the news channel and asks her when and why did he do this. He feels sick. Ishita asks him how did he get the gun. He tells her that he didn’t carry the gun. She tells him that maybe its someone’s conspiracy. Rohan tell the family that Raman is innocent and they shouldn’t let the people bother them now. He tells them that he doesn’t want any commotion to happen. He asks the elders to stay calm.

Mihika gets troubled by the media. Rohan handles them and asks media to leave. He answers the media and gives the statement that Raman isn’t a criminal. Raman tells the doctor that he is still feeling sick. Doctor treats him for his recovery. Inspector asks Raman to tell them if he remembers something. Raman has no idea and tells them that he doesn’t know when he got the gun and met minister.

Ishita asks Raman to take rest for a while. Inspector tells them that he can’t help if Raman doesn’t remember anything. Doctor tells them that Raman was drugged and this can be clear if they conduct the tests. Ishita doesn’t know how did this happen. She tells him that Raman had food at home. She tries to recall when Raman was given the drug. Doctor tells them that Raman is stable now and reports would be coming in some time. Ishita wonders if Sudha is behind this. Karan worries for the investigations and asks Sudha if Rohan will get jailed for this. Sudha assures him that Raman will be going jail, not Rohan. She can’t put Rohan in any danger. She tells Sudha that she will not accept Aaliya, she will get her son back. Yug meets his friends. He shares Raman and Ishita’s high profile mess to them and tells that he wants to help Ishita. His friends ask him not to involve in Ishita’s matters.

Ishita learns that drugs didn’t get traced in blood reports. She tells the inspector that this has happened with Raman before, he was drugged before as well. He tells her that if the evidence isn’t supporting Raman, he will have to arrest Raman. She tells him that Parmeet is the prime suspect and also doubts Sudha.

He tells her that Raman committed a big crime and now he is helpless to arrest him. Yug gets money by his work and wants to thank Ishita. Ranbir asks Yug not to trouble Ishita by calling in such a time. Yug tells them that he will stay away from Ishita, but he feels that she is a good lady. He wants to just thank her and not appear selfish. Ishita asks Raman if he can remember anyone feeding him drugs. Raman doubts on Sudha. Ishita asks him to recall how did Sudha work her plan. Raman doesn’t remember Rohan getting the sweets. Raman gets discharged in a stable state, but gets arrested.

Ishita wants to find a way to help him. She avoids the media. Rohan looks after the elders well. Aaliya gets impressed by him. Sudha and Karan make an entry to take Rohan home. Rohan gets miffed with her. Sudha informs them about Raman’s arrest. Rohan gets a shock by Sudha’s plans and surrenders himself by taking the crime on himself. Sudha fails to get Rohan back.