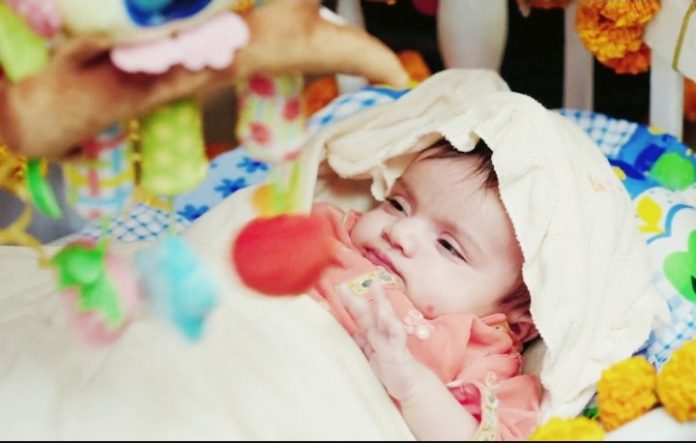 Yeh Rishta Kirti child connects with her. Naira doesn’t want Kartik to have any guilt over the old matters. She also feels guilty that she has misunderstood Leela. Manish and Naira take the baby for a walk and discuss how emotional Kartik is getting regarding Kirti. Naira tells him that even Naitik was in coma and the family has fought for his recovery. They like the baby sleeping in peace. They wish the life stays the same as always. Manish tells him that he will help her in maintaining the fun. The baby enjoys their jokes. Dadi asks Manish to take Naira and baby home urgently. Manish rushes home and asks Dadi what’s the tension. Dadi tells him that she couldn’t wait to meet her great grandson. She takes the baby in arms and cuddles.

Naira tells Kartik that they have to go to the hospital for a follow up. Kartik asks Leela to remember the lie they are keeping. He asks her what shall he do if any doctor knows about the baby’s mature birth. Leela assures him that she will manage the baby’s check up. She then starts blackmailing him and asks him to pay her charges for her help. He tells her that he needs time to decide. She threatens him that she will reveal the truth to everyone.

Kartik doesn’t know how to trust her. He gets angry with the threatening. He feels this is also a big test for him to go to the same hospital where it all started. He prays that things go as its going on. He doesn’t want Naira and Kirti to break down and lose trust on him. Naksh takes care of the baby while Naira goes for the checkup. Kartik feels guilty over his move. Naksh tells them that he is going to take Kirti home, since she is recovering. Kartik wants to know when will Kirti get fine. Naira wishes that Kirti gets recovered completely. Kartik wants good to happen with everyone. Naira speaks to her doctor about the positivity in her life because of baby.

Kartik fights with his alter ego and doesn’t want to lose the baby. He sounds selfish, but doesn’t want the truth to come out. Singhanias get the list of names which Kirti has selected. They want to give the list to Naira so that she can keep one name out of it. Naira gets excited to name the baby. She asks Kartik to get ready and list out all his choices. Kartik stays disturbed. He doesn’t know what to write. She finds him sorrowful again and thinks he is missing Kirti.

Kartik gets emotional seeing Kirti. He wishes she returns to them soon. He is sure that Kirti will understand his decision and explain Naira as well. He wants her to wake up from her sleep. Kirti senses the movement in her and thinks maybe he has just imagined it. Kartik takes Leela’s help to get the baby’s check up done with ease, so that none knows the baby’s birth truth. Leela turns evil to put Kartik in trouble for money. Leela hides her evil intentions, which Kartik gets understanding slowly. Will Naira find out the truth? Keep reading.

Shukla and his family get angry on Krishna and throw her out of the house. Shukla is helpless since he needs Krishna to run the hospital. He asks his son to find Krishna and get her home.

His wife gets upset with his decision and asks him why does he want to bring Krishna back after ousting her once. She doesn’t want Krishna to be in front of her, after developing hatred for her. Krishna is found by Veer, who stops her from committing suicide. She asks him to leave her and go away. He asks her to stop the madness. He stops her from jumping down the bridge.

He scolds her and asks how can she commit suicide, if her family is a bunch of losers. He asks her not to lose hope in life. He says you can’t quit if you lost your husband and you have many problems to deal in life. Krishna clears his misunderstanding and tells him that she wasn’t giving up her life, but just picking her fallen locket. He asks what’s so special in that locket that you are risking your life for it. She tells him that locket contains her emotions and he will never understand it. He helps her and gets the locket for her. He asks her to get her emotions back. She apologizes to him.