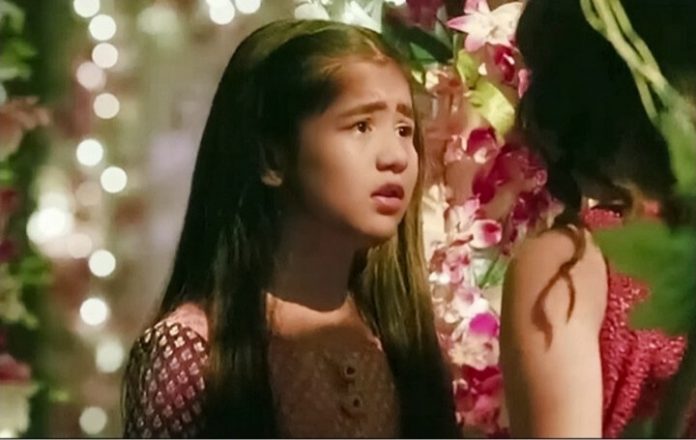 Kulfi Kumar Huge trouble. Nimrat denies to identify her friend. She tells Kulfi that she isn’t Namrata. She lies about her real name. Kulfi senses that she got scared. She learns more about Nimrat. Sikandar happens to be around, which gives tension to Nimrat. Nimrat doesn’t want her truth to come out in front of Kulfi. She tries to trick Kulfi by her convincing drama of lies. Nimrat tells Kulfi that the lady is lying to them. She gets angry on Kulfi and shows her unseen side. Kulfi gets confused about Nimrat. Lovely meets Sikandar again. She gets to meet Nimrat and ignores her. Kulfi feels Nimrat is hiding something from her. Lovely makes Kulfi suspicious about Nimrat. Lovely knows that Kulfi will stop Sikandar and Nimrat’s marriage once Nimrat gets exposed. She confronts Nimrat for hiding her real name Namrata.

Nimrat lies to her once again. Lovely tells her that Kulfi will know the truth soon, since she is very clever girl. She advises Nimrat to hide her certificates and ID proofs from Kulfi, else the truth will be out. Nimrat runs to hide the evidences containing her identity information. Kulfi gets thinking about Nimrat. She wants to find about Nimrat soon. Nimrat doesn’t want Kulfi to know anything, but Kulfi learns the truth that Nimrat’s name is Namrata.

Amyra tells Kulfi that Nimrat has lied and changed her name just to get in Sikandar’s life. She tells Kulfi that Nimrat is a fraud and using their emotions. She asks Kulfi to realize how Nimrat is using her to marry Sikandar. Kulfi shatters knowing she got cheated by Nimrat. Amyra scolds Nimrat and goes away. Kulfi feels bad that she has believed Nimrat. Nimrat scolds her for being so foolish and falling in her words. Kulfi gets angry on her for hurting her heart. She doesn’t want to forgive Nimrat. Nimrat tells her that she won’t apologize. Kulfi tells her that she will tell her truth to Sikandar.

She doesn’t want Nimrat to make Sikandar away from family. Nimrat burns the evidences and threatens Kulfi. She asks Kulfi to think what she can do with her. She asks Kulfi not to go against her if she wants to stay fine. Kulfi reaches Amyra to tell her Nimrat’s truth. She reveals how Nimrat is intending to break the family. She begs Amyra to help her in saving the family. Amyra asks her if she believes her now after seeing Nimrat’s true face. Kulfi tells her about Nimrat’s fatal threatening. Amyra agrees to help Kulfi for the sake of saving Sikandar and Lovely’s marriage. Amyra tells her that she will try to find some way. Lovely employs Amyra in her plan, so that they can make Kulfi out of Sikandar’s life. Kulfi follows Nimrat to know her further plans.