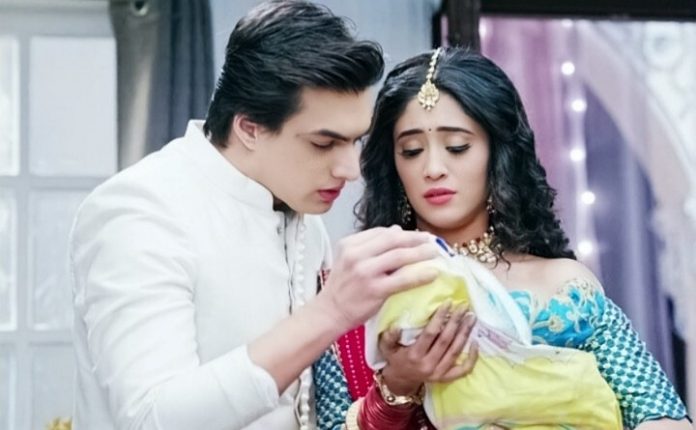 YRKKH Shocking Upcoming Naira tries to find the truth about Krish, since Kartik stays disturbed. Kartik’s big secret comes out. The family hates him for his huge lie which shatters the meaning of relationships. Manish asks Kartik how can he justify his decision now, can he meet their eyes now. He scolds Kartik and fumes on his madness. He didn’t expect this from Kartik. Goenkas and Singhanias are in shock. Naira is in bigger shock knowing she has lost her baby and Krish is Kirti’s baby.

Naksh tells Kartik that he would have killed him for this baby swapping crime. He scolds Kartik for taking advantage of Kirti’s coma state and his absence. He asks Kartik how could he get so selfish and steal their child. Naira shatters with this truth. Kartik cries out his innocence to the family. They don’t forgive him. Kirti ends ties with him. Kartik breaks down and pleads them to forgive him.

Manish tells Kartik that they can’t forgive him for this big thing. Kartik bears the anger of Manish, Naksh and Kirti. Naira cries thinking of her baby loss. Kartik tells them that he didn’t mean to snatch Kirti’s child, he wanted to neutralize Naira. Naksh scolds him for not letting Naira see her baby for the last time. He exposes Kartik’s crime to the family.

Kirti asks Kartik did he forget their relation before taking this step. Singhanias scold Kartik and taunt him. He becomes the victim and faces their tormenting taunts. Kartik tells them that he has lost his baby and wasn’t in right frame of mind, he has done what he felt right in that moment. Kirti gets in pain and tells Naira that she won’t forgive Kartik this time. She takes Krish from Naira. Kartik’s one lie taken in weak moment breaks everything. The families get broken with this truth.

Naira cries and tells Kirti that she can’t give her baby. Naira takes Krish with her and runs away to the room. She locks herself in the room. Kirti and Naksh run after Naira to get their son back. Kirti begs Naira to give her baby to her once, since she didn’t even hug her baby since his birth. Naksh consoles Kirti. Naira can’t believe the series of events and feels she won’t be able to handle the truth. Naira also takes the selfish step like Kartik and keeps Krish with her, while Krish and Kirti cry for each other. The family consoles Kirti’s tears, while Kartik sits in shock, feeling guilty for complicating the life of two mothers. Will Naira return Kirti’s child to her? Keep reading.

Dil Toh Happy Hai Ji:
Rocky kidnaps Happy and tortures her like a crazy guy. He points gun at her and makes her dance. He makes her lie on the ice slab. She shouts for help. Rocky wants her to shout more and beg for help. He tells her that she has messed up with him and now she will see his wrath.

Happy gets trapped by him. She wants to reach her family some how. Rocky breaks all the limits and misunderstands Happy’s intentions. He has a motive that’s to protect his family from Happy. He falls in Biji and Bua’s words against Happy. He feels Happy is a evil-minded girl who wants to cheat Chintu for money. He hurts Happy and tells her that no one will be coming to help her.

Ishqbaaz:
Mannat finally breaks her silence and tells Shivaansh that she will take revenge on him, the same way as he took revenge on her. She is angry as Munni is missing. She is sure that he has kidnapped Munni. She doesn’t know that Varun is the kidnapper. She says I m responsible for the problems in your family, but I didn’t do anything deliberately, you have put Munni in danger. He asks her what did he do, he doesn’t know Munni. He wants to clarify to her. She doesn’t listen to him. She reprimands him and shows her bold side. She tells him that she will wait for the day when she takes revenge on him. He feels bad hearing her. He wants to answer her some day. The misunderstandings grow between them.