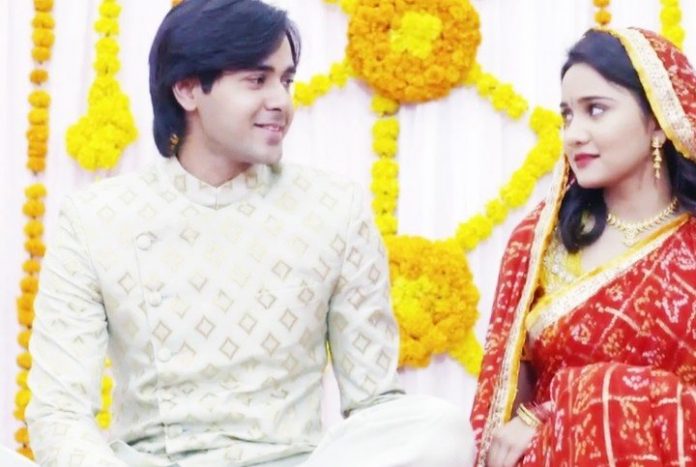 Yeh Un Dinon Shakti and more. Rajaa Beta: Dadi is upset with Vedant and cries as the mannat was broken which her husband had done for him in his childhood. Vedant feels bad and couldn’t bear the fact that Dadi doesn’t want to talk to him. Purva washes and cleans all the utensils. Dadi tells her that nothing will happen with the cleaning, and they have to call Pandit from the temple and get the havan done at home for purification of the house. She declares that Purva will not sit in the havan. Vedant and Purva agree to her decision. Gomti takes the mutton kabab out of the dustbin and tells Sumiti that this is the permanent ticket to send Purva to her Mayka. She says this will be found tomorrow in between the havan ingredients.

Shakti: Everyone is shocked and pained to see injury marks on Harman’s body by Gurmeet. Preeto and Harman get angry on Sukha and feel harman’s pain. Soumya says sorry to Harman and applies ointment on his hand. She tells him that she was blinded in motherly’s love that she couldn’t see father’s love as a father can’t express his pain like a mother. She tells that everyone in the house is crying and upset, and missing Soham badly.

Tujhse Hai Raabta: Atharv tells Malhar that his Servant was stealing Apple from the kitchen so he will get the punishment. He asks his men to aim the knife at the apple on Servant’s head. They are about to throw a knife on the servant’s head. Atharv tells Malhar that if the servant dies by mistake then you will lose your job. He says he will leave him but for that Malhar has to kneel down and cleans his shoes. Malhar is forced and helpless. Kalyani comes and stops Malhar. She tells that Malhar will not bend in front of him. Atharv gets angry and plans to trap Malhar in some other way.

His assistant Sneha traps Malhar and accuses him of molesting him. Aao Saheb says if Malhar has done this? Anupriya tells that Malhar can’t do this. Sneha acts as the molested victim on Atharv’s orders. Sampada snatches the baby from Kalyani and tells that she can’t let her son be with molester man. Atharv asks Malhar’s constables to arrest him. Malhar is shocked and silent. Kalyani asks Constables to take Malhar as he is guilty. She signs him not to worry. She proves Malhar’s innocence and Sneha’s lie and takes back Moksh from Sampada.

Yeh Un Dinon Ki Baat Hai: Dadi Bua tells her granddaughter that Naina will go to Sameer’s house after marriage. Sameer decorates the house and tells his friends that the house will be of Naina and him after 3 days. Naina is hopeful that Rakesh attends her marriage and do her kanyadaan. Rakesh melts down and decides to attend her marriage. Tai tries to stop him and provokes him against Naina. Vishaka and family applies haldi to Sameer. He is really happy to celebrate his happiness. He is soon going to become the groom. He has faced many challenges to see this day. Vishaka, Mama and others dance in the haldi function. Sameer dances along. He calls up Naina to see her once. Naina is troubled by Tai ji. Tai ji doesn’t want Rakesh to attend the marriage. Anand and Bela handle all the problems.

Naina dances with Bela and gets emotional. The Sangeet function becomes an all girl function. Bela is happy and wants the best for Naina. Naina, her cousins and family women dance to celebrate the Sangeet. Bela can scold Naina and stay annoyed with her for any reason, but she can’t see anyone else scolding Naina. She is very protective about Naina. She loves Naina a lot. She shows anger on Naina to protect her from others’ anger. Naina can’t get Bela stay annoyed and convinces her by a cute dance act. Bela is afraid that Naina and Preeti can fall in any trouble.

Bela wishes Tai ji and Rakesh stop making problems for Naina. Anand and Bela stay as Naina’s parents and biggest support. Naina’s friends tease her about Sameer. They play Antakshari. Naina is happy that Sameer is going to marry her. She gets Sameer’s name mehendi on her hands. The functions will get interesting twists.

Aapke Aa Jane Se:
Vedika gets convinced by Sahil and goes to Agarwal house for the sake of Ved. Vedika gets cheated one again by Pankti’s mum. Vedika was giving a last chance to Sahil. Vedika learns that Sahil is the father of Pankti’s coming child. She gets moved by Pankti’s pregnancy news. Vedika and Sahil get a shock on reading Pankti’s positive reports of pregnancy. Vedika blames Sahil and decides to leave the house. He is also suffering because of the conspiracies since he loses his true love Vedika. He is innocent in the matter. He gets trapped and loses out due to the fake reports. He wants to win Vedika’s trust once again.