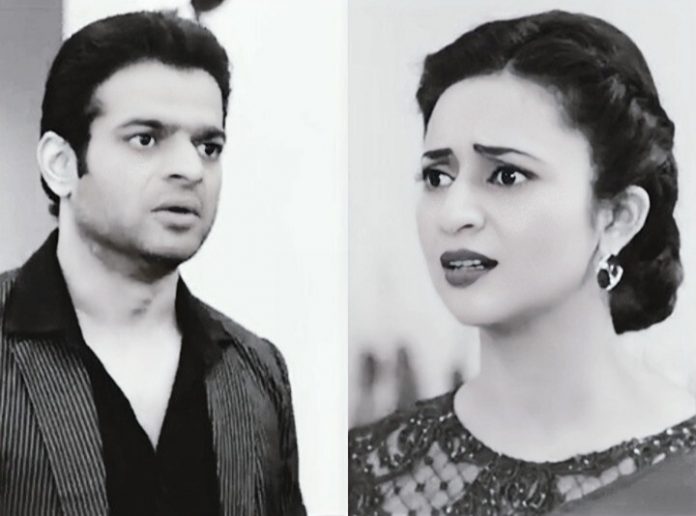 YHM Bhallas shocked. Aaliya doesn’t accept Yug’s truth. She tells them that she will always believe Adi. Yug thanks her for always trusting him and expresses his love for her. Ishita scolds Yug for breaking Aaliya’s heart. She asks him not to play with Aaliya’s feelings. Yug maintains the lie that he is Adi, since he wants to be with Aaliya. Aaliya doesn’t want Yug to listen to anyone. She goes with Adi. Karan learns that his goons failed to get the baby. He gets angry that his plan failed. He wonders how did this happen. Karan doesn’t know if Yug is caught. Yug’s friends ask him not to cheat Yug like this. They ask Yug to forget Aaliya and not ruin her life. They don’t want Yug to make a joke of his love.

Karan reaches there and finds Yug with his friends. He doesn’t want the truth to come out. Yug asks his friends to stop at once, since he doesn’t know him. He lies to them that he is Adi. Aaliya asks Yug not to prove himslf, since she knows he is Adi. Karan is happy that Yug has charmed Aaliya by his magic. He is sure that Yug will act well and keep up the drama. Aaliya decides to go on a drive with Yug.

She informs this at home. She doesn’t want to argue with Ishita. Ishita wants Aaliya home. Ruhi tells them that Aaliya is with Yug. Raman asks Ishita to let Aaliya stay happy. Ishita asks him how can they accept Yug as Adi, even after knowing the truth. Raman tells Ishita that he wants Yug in the family, even if he isn’t Adi. Ruhi tells Ishita about her plan going wrong. The family worries that Ruhi has risked baby’s life. Vishal and Ranbir tell Bhallas about Yug, who is an orphan, a lonely soul. They tell Ishita that Yug is in need of family’s love. Bhallas decide to accept Yug as Adi in their lives, since Yug is an orphan. They feel its not wrong if Yug stays with them and brings happiness as Adi.

They get emotional. They decide to give some time to Aaliya so that she knows Yug’s identity on her own. They are sure that Aaliya won’t have any relation with Yug, knowing his identity. Karan talks to Yug over phone. Yug tells Karan that he loves Aaliya a lot, but can’t hurt anyone in her family. He wants to love Bhallas as well. He feels Ishita has learnt a lesson since he has convinced Aaliya.

Karan is happy to know that his plan is still going fine. Yug and Aaliya spend time. Yug tells Aaliya that he is disturbed because of Ishita. Aaliya doesn’t want to follow anyone’s opinion about him. They have a moment. She tells him that she loves him a lot. Yug gets overjoyed with her love confession. Rohan gets angered seeing them together. Bala pacifies Rohan. He wants Rohan to understand Aaliya’s craze for her first love Adi. Rohan wants his wife back. Bala tells Rohan that Aaliya doesn’t love him much and he should give her some time. He advises Rohan to wait for Aaliya. Raman tells Ishita that they should trust Yug, he is a nice person, he is lying for the sake of love. He feels Yug isn’t harming to them.