Yeh Rishta Upcoming confrontation. Naira tells Kartik that she feels its a special day for her. Kartik gets happy knowing she is remembering their special days. He wishes her happy anniversary and professes love to her, in his dream. Kartik feels bad that he can’t tell the truth to Naira even if she is with him. Naira senses his words even though he doesn’t say anything. He tells her that she will know everything soon. He is happy that Naira remembers everything by her heart. Dadi makes a mind to talk to Singhanias for the sake of Kartik. Dadi meets Naksh to have a final talk. Naksh tells Dadi that she can meet Kirti and Krish, but not Naira.

Manish learns that Dadi has gone to meet Naksh. He feels Naksh may hurt Dadi’s sentiments. He feels Dadi should have not gone there. Meanwhile, Kartik and Naira have a moment in the dance class. None knows that they are still together. Dadi demands Naksh to express his stand.

Naksh has no interest to talk to Goenkas. Dadi tells Naksh that even if he denies, Naira will be bahu of Goenkas. Dadi tells Naksh that they want to take Naira with them. Manish and Surekha also try to explain Singhanias to give a last chance to Kartik and Naira’s relation. Dadi gets into her form and vents anger on Naksh, who is dominating everyone. She asks Naksh to stay annoyed with Kartik, but not separate Kartik and Naira, its a sin to separate two lovers. She asks Naksh how can he commit this sin to separate a husband from his wife.

She doesn’t want Naksh to decide for Kartik and Naira’s lives. Dadi wants to unite KaiRa. She tells Naksh that none can deny that Naira is Kartik’s wife. She begs Naksh to forgive Kartik. Kartik gets worried when Naira falls short of breath. He rushes to help her. He takes her to the hospital. She tells him that she feels low on energy and needs something sweet. Kartik and Naira cut the cake as per destiny, and celebrate their anniversary. She is unaware of the truth, while he feeds her the cake.

Naksh asks Dadi not to hurt Naira, and remember what Kartik has done to traumatize her. He doesn’t want to take any chance. Manish tells Naksh that they aren’t making any wrong demands. He asks Naksh to keep his hatred away. Naksh crosses limits and argues with Goenkas. Dadi gets stunned when Devyaani also expresses bitterness over the past. Kirti gets worried seeing the tensions in their family. Dadi’s heart breaks. Kartik drops Naira home.

Dadi asks Naksh to support Kartik and Naira, and unite them again. She explains Naksh that Naira’s happiness lies in Kartik. Naksh tells Dadi that Naira is moving on in her new life and she doesn’t deserve to be pulled back in the past. He wants to settle Naira with Rishabh.

Naksh doesn’t accept that Kartik and Naira are incomplete without each other. He clears the fact that he doesn’t want to keep any relation with Goenkas. Dadi gets much disappointed with Naksh’s bitterness. Naksh stops Goenkas from telling truth to Naira. They get emotional to see Naira after so many days. Naira doesn’t remember anyone. Naksh doesn’t want to answer Naira. Dadi asks him to reveal truth to Naira and let her decide. Naira pens down her feelings for Sid. She finds a gift in her bag and likes the bracelet. She doesn’t know that Kartik has put the gift in her bag. Kartik’s happiness soon ends when he finds Naira with her new friend.

Kartik and Naira decide to participate in Maha Shivratri event, where they both would be playing Shiv and Parvati in the skit. Naira hunts for a partner who will be perfectly cast opposite her. Rishabh tells her that he will be becoming Shiv and dance with her as Shiv. He proposes her with his idea, so that he can get more time to spend with her. Kartik reaches the temple and finds Naira with Rishabh. On finding Naksh as the main culprit to bring them together, Kartik goes on to question Naksh about Rishabh. He demands to know about the guy who is getting close to Naira.

Naksh wants Rishabh to help Naira in moving on in her life. He wishes Rishabh and Naira to get married. He tells Kartik that he would do anything to secure Naira’s happiness, and he won’t step back if he realizes that Rishabh carries her happiness.

Kartik rages knowing Naksh’s silly plans. Kartik asks Naksh to just remember the biggest truth that Naira is still Kartik Goenka’s wife. He reprimands Naksh for bringing Rishabh between Naira and him. Naksh tells him that he can do anything to protect Naira from all sorrows. Kartik warns him against doing any evil. Kartik wants his rights on his wife. He is giving time to Naira just to help her regain her memory. Kartik takes the Shiv avatar and goes to meet Naira. While she gets decked up like Parvati, she looks around to know who has become Shiv. She waits for Rishabh as it was decided before. She gets a huge surprised on finding her favorite dance partner Sid as Shiv. Kartik tells her that he has become Shiv just for her. They go ahead to perform in the Shiv Parvati skit. He hopes that she regains her memory, since they performed in similar play before. 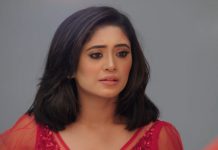