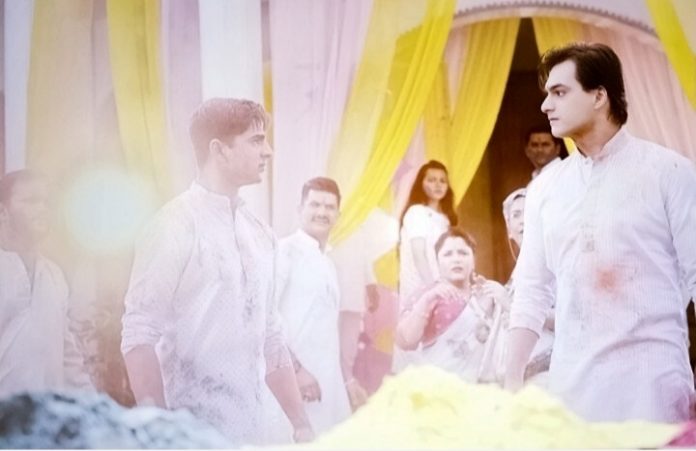 YRKKH Yeh Rishtey Muskaan Krishna Chali London: Krishna and Veer are coming close. Veer writes his name with mehendi on her hand. Krishna is getting influenced by him. The destiny brings them together. They have a cute moment of romance. Veer falls for her once again when he sees her in the Sangeet ceremony. They have a performance in the Sangeet. Veer is happy to win Krishna’s love. He sees love in her eyes and is happy that she is close to get convinced. Shivani insults Krishna and upsets her. Shivani and Bela join hands and plan Krishna’s wardrobe malfunction. Veer saves Krishna from Shivani’s evil intentions. He shouts on Shivani for having such a cheap mentality. He tells Sunaina about Shivani’s dirty tricks. Veer can’t see Krishna getting insulted.

Dhanak’s job falls in risk when Raghu meets the police officers. Raghu threatens the police officers so that Dhanak gets her job position back. Officer is angered that Dhanak is having terms with the goons. He removes Dhanak from the IPS training camp and breaks her dreams. Raghu wants to protect Dhanak’s dreams. He pleads to the commissioner to give a chance to Dhanak, who is much deserving. Raghu loses his temper when the officers refuse. He points gun at them first. He then emotionally blackmails them and threatens of a suicide. Commissioner slaps Raghu and asks him to get lost. Raghu wants Dhanak’s happiness. He has to keep his vows to Dhanak so that he can win her love. He controls his anger and tries to solve the problem in a calm way.

Kartik refuses to marry Naira, so that Naksh and Kirti’s relation gets better. When Kartik meets Naira for Holi festive, Naira shows attitude. She is much upset with Kartik, that he had refused for marriage earlier. Kartik wants to unite with her. Naira avoids him in anger. She wants Kartik to convince her with love. She expresses her annoyance to Kartik. Kartik prays that Naira forgives him. Naksh waits for a miracle that Kartik and Naira unite again. The family tries to bring them together. Kartik and Naira consume the bhaang thandai. They both forget their problems for sometime and dance.

Kartik tells her that he wants their marriage to happen. Gayu returns in the family. Gayu and Rama’s entry will bring a twist in Kartik and Naira’s story. Gayu wishes to unite them.Kartik and Naira play Holi with their families. The happiness doubles up this time, when Kirti’s insecurities get solved and Naksh also realizes how badly he was ignoring Kirti. Naksh and Kirti also make a fresh start in their relationship. Kartik-Naira, Naksh-Kirti and the family members have wonderful performances in the holi festive. Kartik brings happiness in the family and makes the holi a memorable one for everyone.

Mishti and Abir help each other unknowingly. They both are unaware of their identities. Abir plays holi with his family, happily like never before. Mishti’s family meets Abir’s family for their alliance talks on the auspicious eve of Holi. Abir has Mishti’s one memory, that’s her earring. Kuhu wears Mishti’s earring. Abir gets confused when he sees Kuhu wearing the same earring. He thinks Kuhu is the girl he had seen before. He gets confused when he finds Kuhu’s voice different.

He hears Mishti’s voice and thinks she is the one whom he heard talking to Ketki. Kuhu likes Kunal a lot. She wishes to marry Kunal. Mishti hides from Abir. She plans to throw holi colors on him. Abir catches her and throws colors at her. Abir laughs. Mishti makes him fall over the colors. They both have a sweet holi moment. Mishti gets mischievous. Abir and Kunal play music, while Mishti and Kuhu dance with the girls.

Ronak and Muskaan are in tension because of Kajal. Kajal’s parents get murdered by someone mysterious. Kajal is also suffering because of the deadly attack. Ronak has total sympathy with Kajal. He is much upset. He thinks he is doing injustice with Muskaan, since its his duty to keep her happy. He thinks he isn’t succeeding in making the sorrows away from her life. He wants to make up for all the past troubles and bring happiness in her life. Ronak and Muskaan’s holi romance will be seen.