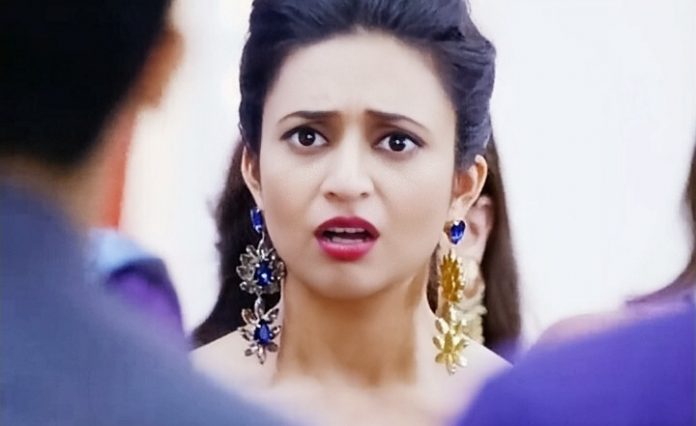 Yeh Hai Mohabbatein Sahil enters the Bhalla family. Raman wonders who has leaked the truth to Muskaan. Aaliya finally gets the ring which she had bought for Adi. She tells Raman that she was looking for the package. She gifts the ring to Adi. She wanted to surprise him. Yug gets happy and thanks her for all her love. Rohan feels much hurt watching them together. Raman thought Ishita had ordered the ring to apologize to him. Ishita clears the misunderstanding and tells him that she expects true romance feelings from him. They get fighting again. Ruhi asks Karan not to break their family by blaming Adi. Rohan asks Ruhi not to blame Karan. Yug gets angered and goes to reveal Karan’s truth. Rohan doesn’t like to hear anything against his brother.

Raman learns the shocking news that Muskaan is released from the jail. Inspector tells Raman that there is no proper evidence against Muskaan. Ishita is sure that Muskaan will plan an attack on them again. Muskaan meets her brother Sahil and is happy to get his timely help. She tells him about Raman and Ishita, who have insulted her. Sahil wants to kill Bhallas to take revenge. Muskaan tells him how much Raman has troubled her, how much Ishita has insulted her when she went for the land deal.

Sahil tells her that he will not spare the Bhallas and make them pay for all their mistakes. Muskaan is sure that Sahil won’t leave Bhallas in peace. Raman and Ishita are in stress. The family doesn’t want them to put their lives in danger. They advice Raman to give away the property. Ishita doesn’t agree with them. Karan arranges some security guards for the Bhallas. He tells them that Muskaan will plan an attack on them and that’s why he took these safety measures. Rohan feels proud seeing the good change in Karan. Yug doubts Karan’s intentions again. He asks Karan what is he up to. Karan doesn’t reveal his plans to Yug.

Yug confronts him for putting him in trouble. Karan warns him against exposing his plans. He wants Rohan and Aaliya to get separated. He asks Yug to think well if he wants Aaliya or not. Sahil arrives with his goons to counter Raman and Ishita. Ranbir and Vishal also come at target when Sahil threatens the family. Sahil introduces himself to Bhallas. He scolds Raman for insulting his sister and sending her behind bars. Ishita tells Sahil that his sister isn’t innocent. She asks him to limit his sister’s misdeeds. Raman tells Sahil that he has done everything to protect his family.

Ishita accepts that she had slapped Muskaan, who spoke badly about Raman. She apologizes for the slap. She wants to live in peace. She tells Sahil that she wants the matter to end. Raman and Ishita express the truth, that Muskaan had harassed them badly, they were in trouble. They expect Sahil to help them. They tell the entire series of incidents to Sahil. Raman and Ishita ask him to decide who is at fault. Raman acts as a protective shield for the family. He reveals that he has bought the property for his daughters’ security and he won’t give away the property to Muskaan. Sahil calmly lets them speak up the entire matter. He stops his goons and apologizes to Bhallas.

He gives them a word that Muskaan won’t harass them anymore. They can’t believe that Sahil has apologized to them. Karan doesn’t want Sahil to spare the Bhallas. He offers help to Sahil. Sahil warns him against meeting Muskaan again. He doesn’t want to support Karan’s personal grudges against Bhallas. Raman and Ishita are happy that Sahil has ended the matter for their good. Aaliya surprises Yug and asks for a marriage again. Karan calls Yug a lucky person to get such love. Yug doesn’t know what to do, if he should cheat Aaliya and marry her. Rohan gets heartbroken with Aaliya’s decision.