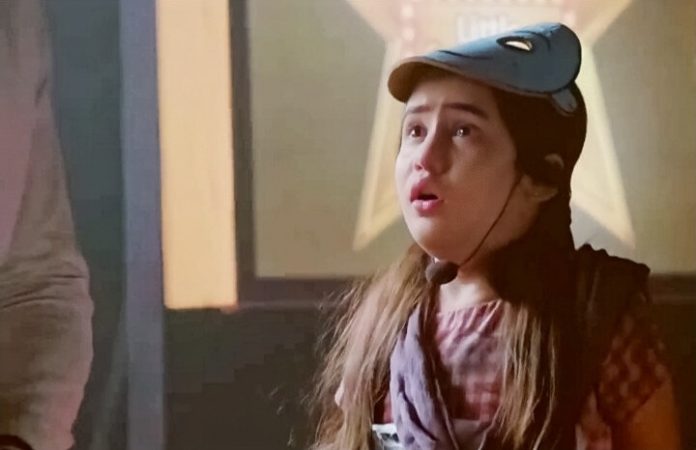 Kulfi Kumar Angelic help. Troubles just don’t stop for little Kulfi, who had tolerated the big shock when her own father abandoned her. She is ready to accept humiliation from the world, to seee if it still affects Sikandar. She gets many hopes and expectations in her eyes, when she gets deeply criticized by a judge in the musical show. The judge holds a grudge against Kulfi for no proper reason. Kulfi sings the song emotionally from her heart, without following the rules of music, as expected by the judge, who objects to disqualify her from the competition, being ruthless to shatter her dreams and future aspirations. Kulfi doesn’t deter and hopes that an angel will be arriving in her life who would be fixing every broken thing for her. Who will play the angel in Kulfi’s life? Will Mia play the angel unknowingly or will Tevar return to help her out? Keep reading.

Aapke Aa Jane Se:
Vedika has returned to Agarwal house, along with Manjula and kids. She takes her new avatar and look. She tells Badi Amma that none can oust her from the house, as she holds 51 percent shares of the property. Vedika shocks the entire family. Badi Amma gets into an argument with her. Vedika wants to bring Arya on the right path. She is ready to do anything to win her daughter back. She tells Badi Amma that Arya needs her mother with her.

Badi Amma doesn’t think so, since Arya’s hatred for Sahil and Vedika is evident. Vedika has felt Arya’s love hidden behind her hatred and wants to revive her old emotions. Ved is happy to be back with the family. Sahil gets a surprise on meeting Vedika again.

Udaan: Sameer feels bad seeing the people in Aazadgunj. He finds the men drunk. He wonders from where are they getting so much alcohol. He follows some drunkards and reaches the alcohol shop, where Bhanu’s goons are selling the alcohol for free only to spoil the people’s health. Bhanu wants the people to just stay intoxicated all the time. He wants everyone in his control. Sameer realizes Bhanu’s plans. He clicks pictures and collects evidence against Bhanu. He wants to expose Bhanu’s truth to the world. He tells Anjor that his work assignment is complete and now they have to trick Bhanu to escape from Aazaadgunj. He finds Anjor getting dizzy. He feels guilty knowing that she has kept a fast for his long life. Anjor wants him to understand that she really loves him.

Roop:
Ishika gets drunk because she is much depressed over Roop’s change. She thinks Roop is doing much wrong with everyone. She sees Roop snatching Himani’s medal and honor. She can’t believe that he is the same person she found different and ideal. She drinks alcohol to lessen her sorrow. She goes in the party and vents out frustration on Roop and Shamsher. She speaks in favor of Himani. She dances in the party. She gets insulting Roop. Shamsher asks Roop to control his wife. Roop finds Ishika in drunken state and worries for the people’s taunts, that may upset Shamsher more.

Ishq Mein Marjawa: Tara meets Aarohi secretly when Deep leaves the place. Tara accepts all her mistakes. Aarohi doesn’t believe her and points gun at her. She thinks Tara can’t be trusted. Tara really wanted to kill Aarohi, after seeing Deep with Aarohi, but she makes some confessions to Aarohi. She reveals many shocking things to Aarohi, which the latter didn’t expect ever. Tara shocks Aarohi by her convincing story.