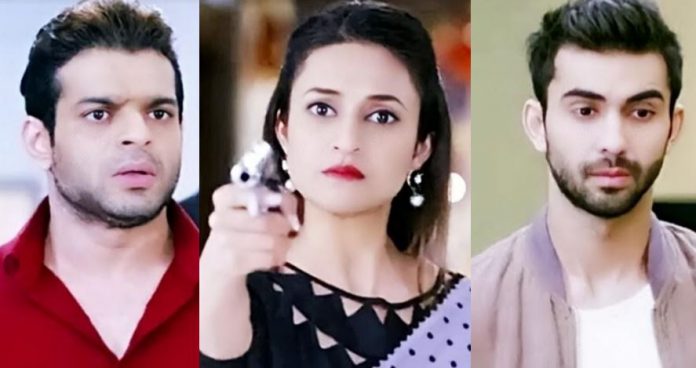 Yeh Hai Mohabbatein Horrid twists Sahil learns that his Shaina in in trouble in the Bhalla house. He reaches there to pick up Shaina. He takes her home. Raman tells the family that they should find Ishita at any cost. He suspects that Ishita is playing Shaina’s role by some helplessness. He tells Mani and Bala that they should know why is Sahil blackmailing Ishita and how. Yug informs Raman that Sahil got Ishita to his home. Mani tells Raman that they should take help from the police so that police can question Sahil. Yug also seeks help from his friends. Vishal and Ranbir don’t want to get into this mess, since they have family responsibilities. Yug tells them that he has to help Ishita and save her from danger.

Ranbir is ready to support Yug. Everyone makes teams to find Ishita and involve police as well. They all barge into Sahil’s house along with the police and question him about kidnapping Ishita. Raman blames Sahil for kidnapping Ishita and forcing her to adapt Shaina’s identity. Raman tells Sahil that he has come to find Ishita. He reveals his plans that he has intentionally let him take Ishita here. Inspector asks Sahil to defend himself if he is innocent, else he will be arrested.

Sahil tells Raman that he doesn’t have time to find Ishita’s lookalike and marry her to plant her in Bhalla house. He calls Raman mad to think of such a silly plotting. He denies all the blames. Raman tells Sahil that police will check the house. They don’t get Ishita there. He wonders where did Sahil send Ishita. Sahil tells Raman that he is ahead of everyone and will not give up his revenge motives soon. Raman gets worried for Ishita. He regrets his move to send Ishita away. Inspector asks Raman isn’t he sure that he has sent Ishita here.

He asks if Raman is venting out his enmity on Sahil and misleading the police. Raman explains the inspector that Sahil wants revenge on them. Raman returns home and tells the family that he didn’t find Ishita. Sahil tells Shamshad that its good he has seen Yug following them and dropped Shaina to other place. He asks Shaina to better stay away from Bhallas for some time. He wants to trouble Raman by distancing him from Ishita. He goes to meet his Shaina. Rohan comes across Sahil and Ishita.

He asks Ishita what is he doing there with Sahil. Rohan gets into a fight with Shamshad. Sahil threatens Rohan and asks him to just leave. Rohan wants to inform Karan about finding Ishita with Sahil. Ruhi and Simmi meet Karan and ask him about Ishita. Ruhi blames him for joining hands with Sahil and planting Ishita’s lookalike Shaina in their house, just like he has sent Adi’s lookalike Yug. Karan pleads his innocence and tells Ruhi that he isn’t involved in any such matter. Rohan calls Karan and tells him about seeing Ishita and Sahil together. Karan asks Ruhi to believe him, he isn’t against Bhallas. He tells Ruhi that Rohan has seen Sahil and Ishita. Rohan sends the location to Karan. Karan shares this with Ruhi, who informs about Ishita to Raman. Sahil makes a new plan to trick Bhallas.