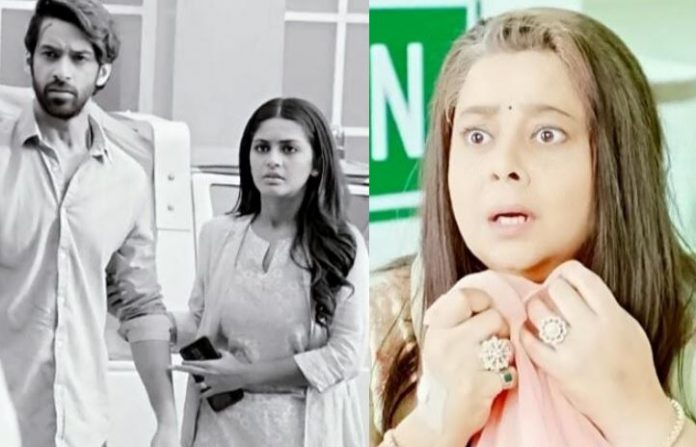 Star Plus Top Ranked Yeh Rishte Hain Pyaar Ke: Abir comes up with a romantic proposal for Mishti. Kunal and Kuhu witness this and ask what’s happening. Mishti tells Kuhu that Manju was asking Abir to make a proposal and show her, Abir was teaching Manju. Kuhu asks Abir and Mishti will they commit suicide if someone asks them to show demo. Mishti introduces her chirpy sister Kuhu. Mishti tells Kuhu that Manju has to propose someone and wanted to learn it from Abir. Kunal gets upset hearing this. Nidhi and Jasmeet meet in the market. They both get into an argument while defending and praising their own families.

Varsha asks Jasmeet not to create a scene in the market. Kunal warns Mishti and asks her to stay away from Abir. Mishti gets upset. Abir tells Kuhu that Mishti and everyone have helped her in setting the school. Kuhu tells him that Kunal wanted to meet them and came to pick him, he dislikes Mishti and they know it well. Abir tells Kuhu that Mishti isn’t wrong and Kunal has to understand this. Mishti tells Kunal that Abir wasn’t proposing her in reality. Kunal knows Abir is very helpful and cheerful. He doesn’t want Mishti to take advantage of his brother. He wants her to leave form the camp. She tells him that the school project is important for her and she will not quit, she has to secure the future of many kids.

Kunal wants Abir to come with him. Abir too refuses to leave as he has a duty towards the NGO. Kuhu tells them that it will be fun if they all are together. She wants to tell Rajshri that she will not come at night. Abir calls Nanu to ask about Kunal. Nanu tells him that he didn’t know about Kunal’s trip to the camp, Kunal didn’t tell anything at the family, he has gone by an excuse. Abir wants to tell the truth to Kunal. Nanu gets worried for them. Rajshri learns that Kuhu lied and went from the home. She realizes that Kuhu is safe. Meenakshi asks Parul to call the farmhouse caretaker and ask about Kunal. Nanu asks them not to call.

Kunal messages Meenakshi that he has reached the farm house safely. Nidhi wants to collect the qualifications certificates to show off to Jasmeet. She gets a parcel, which contains Meenakshi’s big secret. Abir and Mishti ask Kunal and Kuhu about their lies at home to come at the camp. Kunal and Kuhu make excuses. Kuhu tells Mishti about the IT raid. Mishti didn’t know about this and learns that Abir has solved the problem by taking Kunal’s help. Kunal tells Abir that he won’t let anyone come between them. Abir signs him that Mishti has already came between them. He wants Kunal to accept his friendship with Mishti.

Krishna gets worried when she learns that Mohan is going to shoot Veer. She stops Mohan from hurting Veer or anyone. She tells him that he won’t get the money if he takes any life. Mohan threatens her that he will kill Sunaina first, who got him in their lives. Shuklain learns that Sunaina was behind Radhe’s return drama.

Shuklain and Gajanan blame Sunaina and scold her. Shuklain understands that Sunaina has done this to save Veer. Sunaina apologizes to them and regrets for her mistake. Shuklain forgives her. She feels guilty for falling on Mohan’s drama. Krishna bravely hatches the rescue plan. Lali and Bela don’t want Krishna to risk her life. Krishna hugs them and assures that she will be fine.

She enters the hospital by some window. She signals Veer and informs him about the gas cans, which will help them in saving the people. Krishna and Veer get together to save the people. They make a plan with the police. Krishna knows that Mohan could get dangerous and kill people even if he gets the money. Veer misleads Mohan and tries to get the people out safely. Veer takes the people with him, while Krishna attacks Mohan and goons with the gas cans to faint them.

Mohan follows Krishna. His goons get caught. Krishna and Veer rush to save Shukla from Mohan. Mohan threatens to kill Shukla. Krishna doesn’t want Shukla to die. Mohan attempts to save himself till the last. He turns in madness. Shukla gets conscious and helps the police in catching Mohan. Mohan gets arrested. Krishna asks Shukla if he is fine. Shukla feels sorry to always misunderstand Krishna. Sunaina and Shukla family apologize to Krishna. Shuklain wants to unite Krishna and Veer. Keep reading for more Star Plus Top Ranked Previews.