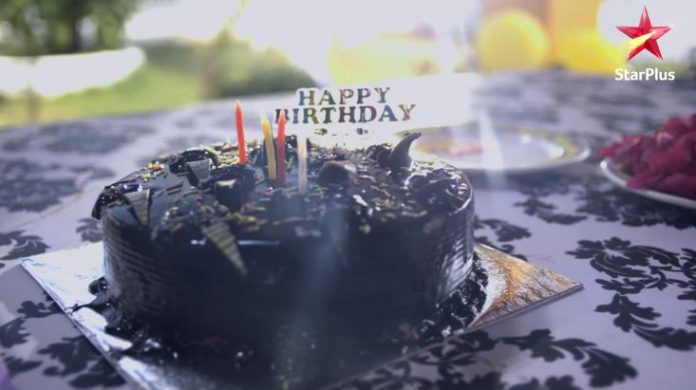 Yeh Rishta Kartik Kairav and Naira. Kartik refuses to have food, missing Naira a lot. Gayu asks him to have food with Vansh. Kartik makes an excuse and tells them that he just had a mango shake. Manish asks Suwarna did Kartik really had any juice. Suwarna tells him that Kartik lied to Vansh to get away, he didn’t eat or drink anything, since he was in his room all day. Samarth and Akhilesh feel bad for Kartik that he got separated from his love. They don’t want fate to play such a game with any lover. Vedika tells them that its tough for Kartik to be alone on Naira’s birthday. Suwarna tells them that maybe Kartik loses his courage and sinks in sorrow on this day. Kartik goes away from the house. The family decides not to bother him and leave him alone with Naira’s memories. They wish Kartik accepts their demand and marries Vedika.

Kairav and Lisa have to arrange some money. Kairav finds a passport fallen and returns to the foreigner. The lady gets happy and gives her much money for his kind help. Lisa tells them that they can celebrate Naira’s birthday well. Kartik celebrates Naira’s birthday at night. He sits talking to her pictures and confesses his love. Kairav wakes up Naira and wishes her birthday.

Kartik and Kairav celebrate the birthday in the same way and give her happiness. Naira gets too happy seeing Kairav’s surprise. Naira and Kairav see the shooting star and make a wish. They get happy. Kartik too sees the shooting star and wishes for Naira’s happiness and peace. Kairav wishes to get his dad back. Naira wants Kairav to be happy. Dadi keeps a puja for Naira in Goenka house. Suwarna tells Vansh that Naira is away, but very special for her. The ashram kids come home to pray for Naira. Kartik gets them home. The family realizes that Kartik has gone to Rishikesh. The kids ask about Vedika.

Vansh tells them that Kartik is going to marry Vedika. Kartik introduces Vansh to them. Kairav makes a lots of good breakfast for Naira. She gets delighted. He asks her if she has no friends. She cries and misses her family and friends. She finds hard to lie to Kairav. She has broken the relation because of Kartik, who has back stabbed her trust with his suspicion. She knows that Kartik isn’t aware of their son. She wants to hide this truth from Kartik. She regrets that Kartik has hurt her a lot and made her take this step. She doesn’t know how to lie to Kairav about his dad.

Lisa calls up Naira and wishes on her birthday. Naira tells her that Kairav has made breakfast for her. She invites Lisa for breakfast. Naira sees Kairav watching her. She cheers him up. Kartik makes a cake for Naira. Kairav also makes a fruit cake for her with the help of Lisa. He tells her that Naira had such cake before and cried. Kartik recalls Naira’s words and wants to make a cake of her choice. Kartik does the puja alone and stops Vedika from participating in the rituals. He gives prasad to the entire family.

Dadi sees Kartik’s rudeness towards Vedika. Naira cries and wishes that she lost her memory, so that she doesn’t remember all that. She feels she can’t give father’s love to Kaira, which will be disheartening for him. Dadi asks Kartik to accept Vedika as fate, since Naira will never come back. Kairav wants to find his dad so that he brings happiness back in Naira’s life.