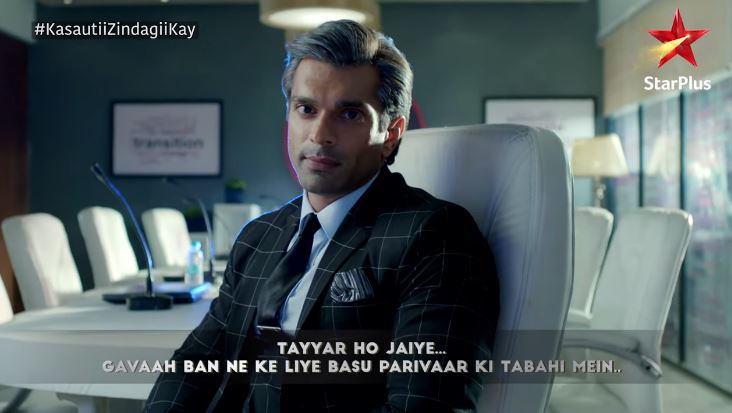 Watch Kasauti Top Secret Promo Anurag and Prerna get engaged in the presence of their families. They wish to have a good life together. They don’t want any bad omen to occur. Mohini surprisingly turns sweet towards Prerna, which makes Prerna suspicious. Prerna wishes that Mohini accepts her. Mohini wants to give the ancestral jewellery to Prerna. She hands over the shagun to Veena and drops the platter. She calls it a bad omen. Mohini uses their different cultures as a weapon to insult Veena. She keeps a raw fish along with the necklace to shock Veena, so that Veena drops the platter. Veena gets a huge shock on seeing the fish and gets away.

She accuses Mohini for insulting them on the name of rituals. Mohini tells Veena that fish is regarded an auspicious thing for their community. She asks Nivedita and Anurag to tell Veena if she has done some mistake. She starts her emotional drama and asks Anurag to defend her if he thinks she is right. She is playing with everyone’s emotions since she doesn’t want Anurag to marry Prerna. Anurag has no idea about her real motives that she doesn’t want him to marry Prerna at any cost. He handles the situation and purifies the jewellery to hand over to Veena.

Mohini tells Veena that she has no issues and wants to accept Prerna. She creates hurdles for Sharma family so that Prerna steps back from the marriage. Mohini seeks help Suman by bribing her so that she can stop the marriage. Mr. Bajaj also makes an entry in Basu house with his revengeful intentions. This time, he wants to take over someone’s business for his personal interests. Sneha happens to be Mr. Bajaj’s daughter, who selects Prerna as her would be mother. Mr. Bajaj wants to ruin Anurag to make Prerna helpless to marry him and become Sneha’s mother. Mr. Bajaj reveals his secret motive that’s to marry Prerna by targeting her weakness Anurag.