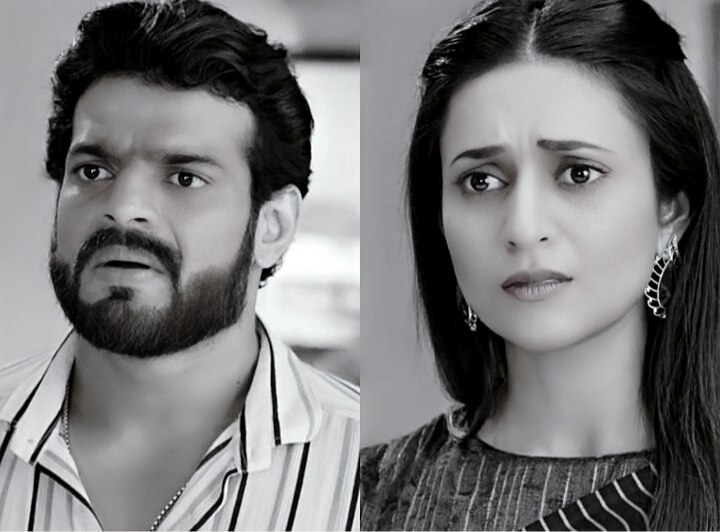 Yeh Hai Mohabbatein Stormy Secret twist 19th June 2019 Shaina gets scared of Sahil’s wrath. She really wants to help Raman and Ishita. She doesn’t want good people to suffer because of her. She decides to tell them about her secret, which can become a helpful source for them to get Sahil punished. Shaina knows Sahil’s dangerous side. She knows Sahil has no limits to his evil. She is aware that Sahil will kill Bhallas and her if he knows that she is alive. She goes to tell a big truth to Raman. She finds Raman and Ishita leaving from the house in a hurry. She fails to tell them anything. She writes a letter for them. She doesn’t want Sahil to know this secret. She is sure that Raman and Ishita will take care of her secret.

Ishita calms down Raman and is sure that Sahil will get caught soon. Raman feels Sahil is good at taking disguises and he may easily get away from the police. Ishita tells Raman that its not easy to avoid the cops. She doesn’t want Raman to get in tension all the time. Raman tells her that Sahil is alert and will do something to save himself. Meanwhile, Sahil thinks of the possibilities of his enemies. He wants to know who is helping Raman and Ishita by going an extra mile against him. He thinks if Shaina is the person giving evidences against him to the police. He wonders how is this possible as he has killed Shaina by his own hands.

He wants to find out the person at the earliest so that no further damages are done to his illegal business. He is already worried by the multiple raids at his illegal work houses. Elsewhere, Simmi shares a big good news with Raman and Ishita. She tells them that Ruhi has finally found love in Karan and they should support them. Raman and Ishita tell her that they already sensed this, but they want Ruhi to be sure of the relationship. They don’t want to advice anything, Karan should make Ruhi realize this on own. They want to give some time to Karan and Ruhi. They are happy to see Karan and Ruhi’s good bonding. Raman is stressed about Sahil.

Ishita asks her children to divert Raman’s attention so that he forgets Sahil for some time. Ruhi and Yug come up with a plan and fake a fight. Yug refuses to work with Ruhi. Raman tells Yug that if Yug doesn’t want to work then he can go for a holiday. He asks Yug and Aaliya to go on a trip together. Yug and Aaliya get too happy hearing about the surprise gift from Raman. Later on, Sahil gets the information about Shaina, that she is very much alive and she is the one who is helping Bhallas. He recalls the times when he tried to kill her.

He wants to kill Shaina for her cheat. He thinks who is the person helping Shaina, since she had no idea about his illegal business hubs. He isn’t aware that Shamshad has given all the information to the police against him. Sahil decides to kill Shaina and also Bhallas. Sahil takes a disguise of a mechanic to spy on Bhallas and catch Shaina. Sahil reaches Shaina and tortures her. He asks her why is she supporting Raman and who is helping her in this case. He threatens her to know the person’s name who is helping her. She doesn’t reveal Shamshad’s name. Sahil reprimands her for ruining his business. Shaina begs him to leave her.

Sahil questions Shaina over her move to join the Bhallas by changing her identity. He tells her that she can get saved from anyone, but not him. He slaps her and threatens to not spare him for the harm she has caused to his business and reputation. Sahil doesn’t want to get arrested and drags Shaina with him to make a quick exit. Will Raman turn up on time to save her life? Keep reading.