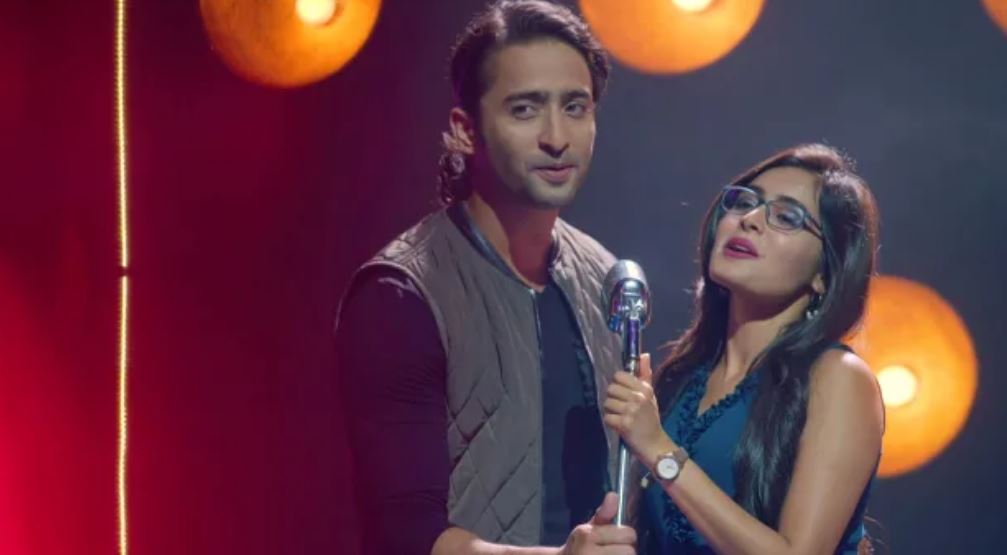 Yeh Rishtey Troubles knocks for Abir and Mishti 26th June 2019 Mishti and Kuhu plan to perform in the pub. Mishti tells Kuhu that Kunal would be coming soon. She plans to bring Kuhu and Kunal together. She thinks to change her old fashioned look as well. She gets ready in the dress brought by Kuhu. Mishti wishes that her plan works. Kuhu meets Kunal and tells him that Mishti has also come to help Abir by singing with him. Kunal gets upset at first on hearing Mishti’s name, but stays relieved that a cheerful Kuhu is with him. Kuhu and Kunal start admiring each other. Kuhu tells him that she is going to sing with Abir. Kuhu is happy in his company. Abir wants to test Mishti’s feelings for him. He wants to know if Mishti and his love stands a chance. He goes to Mishti and helps her in getting ready.

They have a cute moment. Abir talks to Nanu as if he is talking to some girl to make Mishti jealous. He tells Mishti about the girl he likes. He tells her that he wants to sing a song with that girl. She offers to help him. She tells him that she sings well too. Abir and Mishti sing at the pub. Abir imagines the two perfect love stories beginning. He wants Mishti to love him.

Shaurya and Varsha leave from the pub when a power outage occurs. They fail to see their daughters there. Kuhu gets scared of the darkness. Kunal comforts her fears. He tells her that he will just go and meet Abir. He doesn’t see Abir, when Abir is with Mishti. He rushes to meet Shweta on getting a text from her. Kuhu and Mishti realize that Kunal has left. Abir goes after Kunal to bring him back. Shweta tries to fool Kunal and get his love. She confesses her love and asks him to give her one last chance.

Abir stops Kunal from falling in her trap. He proves Shweta’s lies and asks Kunal not to believe her again. Abir scolds Shweta. He protects his brother. Abir tells Mishti that Shweta has come back for a purpose and its definitely fishy. Mishti asks him to share the matter with Kuhu, who has a right to know all this. Abir asks her to trust him and give him some time to sort things. Mishti tells him that she trusts him a lot. He gets glad. They have a moment of friendship. Shweta spots them together and feels she got a good chance to trap Kunal. She wants to expose Abir and Mishti’s relationship to Kunal. She informs Meenakshi about her plans to throw a party and trap Kunal.

Meenakshi wants Shweta to make Kuhu away from Kunal’s life and then leave as well. Parul spies on Meenakshi and learns about Shweta. She doesn’t want Meenakshi to play with Kunal’s life. Abir asks Kunal to not give a chance to Shweta again. He wants to protect Kunal from a heartbreak again. Parul confronts Meenakshi about her plans. Shweta plan to put Mishti in trouble. She invites Kuhu and Kunal in her birthday party.

Abir and Mishti learn that Kunal and Kuhu have accepted the invitation and get worried. Abir and Mishti also attend the party. Mishti falls in trouble when some goons trouble her. Mishti beats the goons. Abir reaches Mishti and hugs her. Abir tells her that he had tracked her and reached her. He tells her that he was feeling that she is in trouble. She feels Abir knows her well. She develops feelings for Abir.