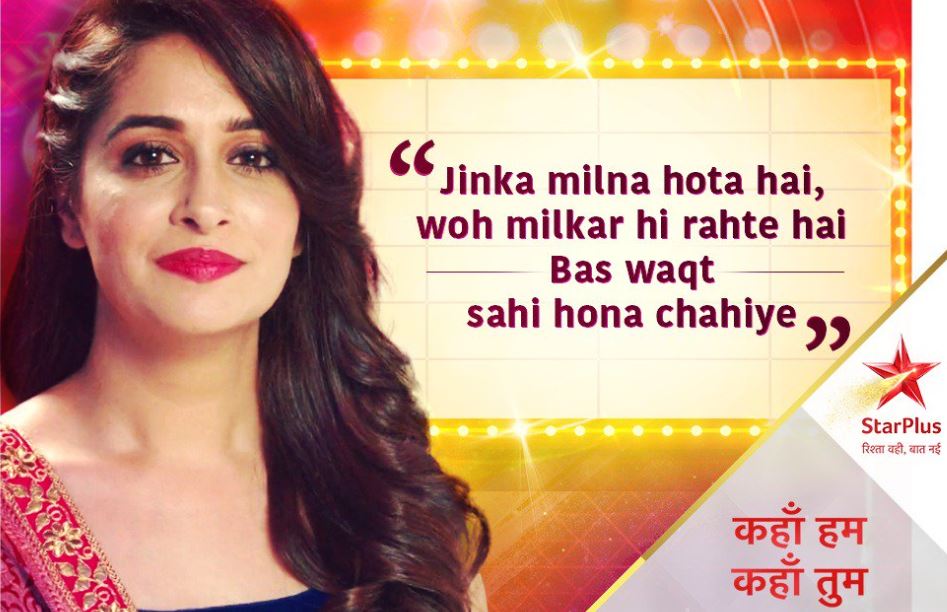 Kahaan Hum Huge drama awaits Sonakshi and Rohit 4th July 2019 Sonakshi and Netra have a talk regarding Rohit’s craze for his watch. Sonakshi tells Netra that he was stating rules at the hospital, now he has to wait outside. Netra worries for her show’s TRPs. Sonakshi asks her not to worry, their show will always be the best. Sonakshi tells her that the competitor channel won’t snatch their viewers. She goes to drop Netra. She finds Rohit sleeping outside on the bench. She thinks he will fall ill. She sends the blanket for him by her maid. Rohit scolds the maid and refuses to take any help.

Sonakshi thinks he is really rude. She sees Rohit and finds him using the blanket, which has her picture. She clicks his picture and laughs. She thinks maybe the person who gifted him the watch is special, since Rohit has stayed outside all night for the watch. Rohit wakes up and finds the blanket with Sonakshi’s picture. Everyone assumes that Rohit is Sonakshi’s big fan. Rohit throws the blanket and denies to be any such fan. He waits to meet Sonakshi. He gets the newspaper. He is shocked by the wrong news that he has harassed Sonakshi at the hospital.

He reads bad remarks on him and his hospital. He rushes to confront Sonakshi. He scolds Sonakshi for using Preeti for publicity. He asks her if she wanted this news to spread. He faints down because of high fever. Sonakshi gets worried for Rohit and takes care of him. She thinks she did wrong to make him stay outside.

Suman calls Nishi to tell about Rohit’s coming at her home. Nishi informs Veena about the news and also about Rohit and Sonakshi’s meet. Naren gets angry over the news. Sonakshi comes close to Rohit while looking after her. She asks the maid to make medicinal kada for Rohit. She gets relieved that Rohit is recovering. She faces another trouble when she sees media reporters at the door. They have come for her interview. Sonakshi doesn’t want the media to see Rohit at her house. She hides Rohit from the media. Rohit gets backbiting about Sonakshi. He is angry that he is in such a situation because of her.

Sonakshi asks Rohit not to come out of her room. She stops the reporters from entering her room. She asks Rohit to hide inside the washroom for some time. When he refuses, she blackmails him about the watch. She handles the media. Rohit gets angered hearing her goody goody interview. Sippy family lands at her house to get Rohit. This causes another trouble. Sonakshi is worried that media will target Rohit badly if Rohit gets spotted at her house.