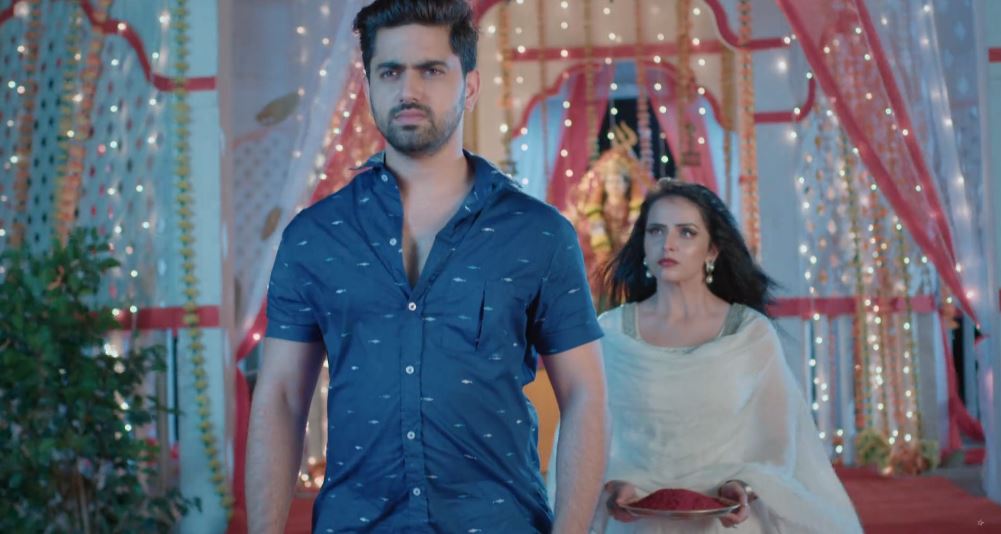 Star Plus Twist Highlights Top 2 Ek Bhram Sarvagunn Sampanna: Pooja tells Amma that she will accept Kabir’s condition to save her mum. She meets Kabir at the temple when he calls her there. She is ready to do anything to save her mum. She asks him what’s his condition. He asks her to marry him. He proposes her for marriage. She angrily goes to slap him. He stops her and taunts her. She tells him that marriage isn’t a play. He asks if she knows the meaning of marriage, then she should remember Dhruv and her marriage. He tells her that he is relieved knowing marriage means to her also. He asks Pooja to marry him and free her mother. Pooja gets sindoor from the temple and accepts his condition.

Kabir keeps the sindoor back and tells her that marriage doesn’t happen like this in the temple, he wants to marry her by all the rituals. He wants to see her getting suffocated by the marriage rituals. Pooja asks Amma to prepare for her marriage. Kabir tells Suman that he will marry Pooja for revenge. Suman and Dadu ask Kabir to stop this madness. Kabir wants to stop the battle and fix everything by the marriage. Pooja tells Amma about Kabir’s big condition. Kabir meets Ishani and asks her to be with Pooja. Ishani confronts Pooja for marrying Kabir. Pooja hugs her and tells her that their mum is alive.

They get emotional. They want to find their mum. Ishani doesn’t want Kabir to marry Pooja. Pooja speaks to her mum and turns restless. Kabir tells Pooja that she can’t reach her mum unless he wants. She warns him against hurting her mum. Chopra thinks why is Pooja helpless to marry Kabir. Kabir dances in his baraat and angers Pooja further. Pooja spies on Kabir to find her mum. They get into a moment, which makes Pooja face humiliation. Ishani will play her game to stop the marriage.

Sonakshi praises Rohit for being a role model. She knows he is a good doctor and a better person who does justice with all his relations. She tells him that he has many layers to his personality, she is getting to see good sides of him with every meeting. She is happy that Rohit has taken such a strong stand for Pooja.

She likes the fact that he respects women so much. Rohit too appreciates Sonakshi for being a good daughter and sister. He calls her personality interesting. Sonakshi recites her dad’s poetry and gets emotional. She leaves for home. Rohit checks the patient Pallavi. He speaks to the patient’s husband.

He explains that he is trying his best to save Pallavi’s life. Yash and Nishi are worried when the adoption file goes missing. They don’t want Pooja to get it. Yash doesn’t want Pooja to learn about her real parents. Nishi wants to find the file. Rohit finds Pallavi stable. He leaves for home and checks Sonakshi’s gift. He wonders what will he do of such a gift. He calls Sonakshi to ask her about the gift. Sonakshi has gifted the waxing strips to Rohit by mistake. She thinks of the phone gift and asks him to start using the gift. She asks him to make a video of his new gift as well. Rohit gets speechless and didn’t expect this from her.

Sonakshi tells him that he shouldn’t be shy. Rohit gets puzzled. Sonakshi goes for the shoot. She learns that Pooja has arrived for an ad shoot. Pooja loses courage and calls off the shoot. Sonakshi meets Pooja and consoles her. Pooja shares her fears with Sonakshi.

Sonakshi asks Pooja to forget the past and move on to make a bright future. Pooja likes Sonakshi’s advice. Rohit’s brothers get laughing when they find the waxing strips with Rohit. Akash tells Nishi that he had got the file. He asks Nishi who are Pooja’s real parents. Nishi doesn’t want to answer him anything. Akash wants to know about Pooja’s parents, finding the matter fishy.

Rohan and Ajit pull Rohit’s leg and learn that Sonakshi has gifted it. Rohit tells them that Sonakshi seems weird sometimes. They ask Rohit to accept the challenge and send the waxing video to Sonakshi, so that she knows Rohit’s courage. Sonakshi gets the phone and wonders what did she gift Rohit. She receives the video and laughs on hearing Rohit’s screams. Sonakshi feels Rohit has kept her word. She wants to meet Rohit and give the phone gift personally. She thinks of Rohit’s sweet gestures. She falls in love with Rohit.