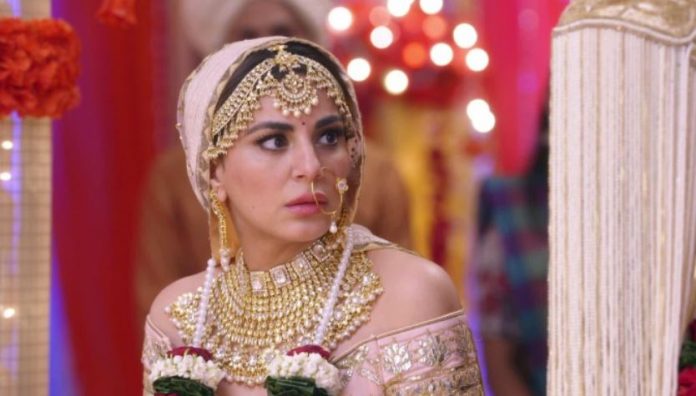 Tellyreviews Weekend Hits Top Spoilers Upcomings Nimki Vidhayak Nimki gets to know about Anaro’s panicking state. She reaches Anaro to know the matter. Ganga Devi returns home and speaks to her family. Parag wants to make a big mall in the city to get big profits. Ganga tells him that she can’t get the land vacated. She doesn’t want to make the people homeless. Parag demands to get the land. Mintu meets the doctor to discuss about Dadi’s health. Dadi gets to see Anaro. Mintu tells Dadi that he spoke to the doctor. Anaro sees him again and shouts. Dadi gets scared seeing Anaro. Nimki asks Dadi not to call Anaro mad. She scolds Dadi while defending Anaro. She sympathizes Anaro.

She asks Anaro to remember the past. Anaro tells Nimki that her son is very much alive. She wants Nimki to see Mintu. She runs after Mintu to stop him. She doesn’t get in control and runs on the road. She meets an accident. Mintu gets to witness the accident. Parag is responsible for Anaro’s accident.

Kundali Bhagya: Karan and Preeta will be finally marrying. Rishabh gets angry on Preeta when she favors Prithvi. He breaks his friendship with Preeta. Karan is determined to marry Preeta. He doesn’t feel love for Preeta, but confesses love to her. He is mad in anger and revenge again. Karan’s suspicion on Preeta isn’t over. Kareena gets a shock knowing Karan has married Preeta. Luthra family is in for a shock with Karan and Preeta’s marriage.

Choti Sardarrni: Param wants to be with Meher. Meher gets rude with Param intentionally so that Param gets away from her. Param gets adamant that he wants to spend time with Meher. Meher cries and limits her emotions. She wants Param to dislike her. She scolds Param on Sarabjeet’s orders. Sarabjeet wants Param to stay unaffected when Meher leaves them. Param gets scared of her and tells her that he doesn’t like her. Meher’s heart breaks to hurt Param’s feelings. She knows Sarabjeet’s decision is right. She wants Param to stay happy always. Sarabjeet consoles his son and takes him.

Ronak explains the plan to Muskaan. He wants to leave from the haveli on time. Muskaan gets smart and daring to trick Maalik, and make an escape from the haveli. Maalik questions Ronak. Ronak lies to him. Maalik seeks his advice to apologize to Muskaan. Ronak asks him to gift her something to express his apology. Maalik takes a gift for Muskaan. He finds her sleeping and wishes that she doesn’t stay upset after seeing the gift. Chamki gets kidnapped by Kuldeep. He gets madly staring at her.

Ronak and Muskaan fool Maalik and make an escape on time. Muskaan wants him to get Chamki as well. Ronak goes back to Maalik’s Lanka to get Chamki. Muskaan meets Gayatri and Hanumant. She feels she has finally got freed from Maalik. She gets into an emotional moment with Gayatri. She didn’t wish to see Gayatri as widow, but knows it was important for Sir ji to die. Gayatri feels Sir ji has done too wrong to send Muskaan to Maalik’s hell. Ronak tries to save Chamki, but doesn’t find her. He doesn’t know Chamki is kidnapped. Ronak wants to leave before Maalik wakes up. Maalik gets informed about Muskaan’s escape.

He alerts his family. He learns Kuldeep has kidnapped Chamki. Kuldeep flirts with Chamki. Maalik reprimands his family for being so careless. Ronak’s plan to escape fails. He wishes that at least Muskaan goes home safely. Soon, Maalik’s men catch Gayatri and Muskaan. Maalik reaches them to punish. He can’t accept Muskan’s betrayal. He wants to kill Gayatri to punish Muskaan. Ronak falls helpless on witnessing Maalik’s terror. Ronak wants to save his mother and wife from Maalik.