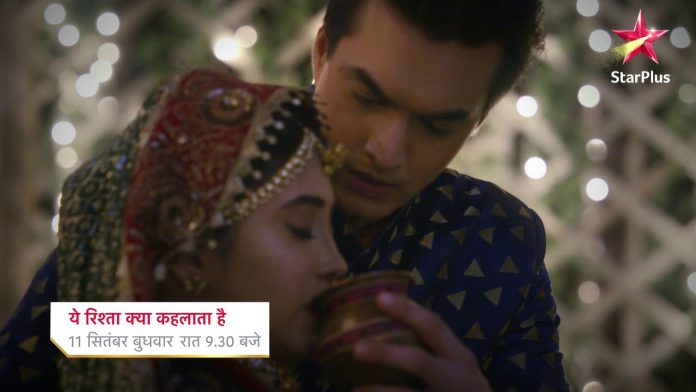 Yeh Rishta Teej Promo Highlights Kaira celebrate Teej Vedika and Naira have a face off. Naira tells Vedika that she won’t be celebrating her Teej. She gets too upset and sees her mehendi. Vedika is happy with her assurance. Bhabhimaa requests Dadi to convince Kairav and send him home with Naira. She realizes that it will be too tough for Naira to witness Kartik and Vedika’s Teej celebrations. She also fears that Kairav can learn the truth that Kartik is now married to Vedika and may react in an unexpected manner. She asks Dadi to just send Naira home so that they don’t have to handle more stress. Bhabhimaa and Dadi also feel for Vedika, whose happiness is getting down because of Naira’s stay in Goenka house.

Dadi doesn’t want to part away Kairav. Bhabhimaa asks her to send Kairav just for one day so that Teej gets over in peace. Dadi agrees to her. She tries hard to convince Kairav to go to stay with Naira at Singhania house. Kairav feels like Dadi is punishing him. He refuses to go anywhere. He wants to celebrate Teej with his parents and family. Meanwhile, Suwarna doesn’t want to start the Teej function decorations and arrangements in front of Naira. She asks everyone to start the arrangements at night, so that Naira sight anything. She doesn’t want Naira to get disturbed. She knows its tough for Naira to tolerate such sight.

Gayu and Suwarna also realize that Naira will be hurt. Dadi tries to make things easy. She doesn’t want any drama in front of the guests because of Naira’s presence. Kairav cries out that he won’t go to Singhanias. Kartik and Naira worry seeing Kairav crying. Kairav gets stubborn that he will be with Kartik and Naira on Teej. Kartik consoles Kairav. He lies that Dadi was just joking and tricking him. He tells Kairav that they will be together with the family on Teej. Kairav gets happy knowing it was just a joke. Naira gets upset. Kartik misunderstands Naira again. He thinks she has a problem to stay here.

He asks her to leave from the house if she has any problem. Suwarna fears that things will go out of hands on Teej. Dadi guides everyone about keeping the fast. Kartik gets emotional when he dreams of Naira. They have a cute argument in their dream sequence. Kartik wishes that Naira keeps a fast for him, since their love can never change. Naira also feels that her love for Kartik can never change, even if they have no relation between them. Naira happens to meet them. She takes the injection for Kairav. Vedika and Goenkas get to see her mehendi. They don’t know that Kairav has written Kartik’s name on her hand. Vedika gets in a dilemma.

Kartik and Naira inject the medicine to Kairav. They share their duties. Kartik wants to make new arrangements for Kairav. He reminds Naira about the Teej. Kairav is happy to be with them. He wishes them. He expresses his feelings and love for his parents. He asks them not to fight again. He senses Kartik’s annoyance on Naira. He wants Naira to keep the fast for Kartik and make their bond stronger. Kartik avoids the situation. Naira eats the food to keep the fast for Kartik. On the other hand, Vedika goes mad in tension thinking of Naira trying to celebrate Teej by making excuse of Kairav. Dadi tells Vedika that Kairav had applied the mehendi to Naira and its better they don’t overthink about it. Vedika starts doubting Naira’s intentions.

She fights her dilemma. Naira keeps the fast for Kartik, since she has been doing the same all these years with a single thought that love can never end. She cries that she has no marital relation with Kartik since he got married to Vedika. Naira feels bad that she has lost all her rights on Kartik. She regrets to not listen to her heart before. She regrets for not stopping his marriage when she had the time and total chance to do so. She could have saved Kartik and Vedika from such complications too. She feels bad that she has taken major decisions wrong. She decides to pray for Kartik’s long life and also Kairav’s welfare.

Ahead in the show: Kartik helps Naira in Liza’s matter. He tells her that Akhilesh can provide them the information about the sim. He reminds her about Teej. He indirectly asks her to keep the fast. She reacts rudely. Kartik wants to find out if she kept the fast. He gets mistaken and thinks Naira didn’t keep any fast. Kartik and Naira will be seen celebrating Teej together. Naira hides from the family, while she keeps the fast for Kartik. Naira still believes in Kartik’s love. She doesn’t want to admit her feelings to him. Still, Kartik learns her feelings, since their love is mutual. Kartik tells her that she is his life and everything. He wants to stop the moment which takes Naira away from him. He breaks her fast and gets happy to celebrate Teej with her.