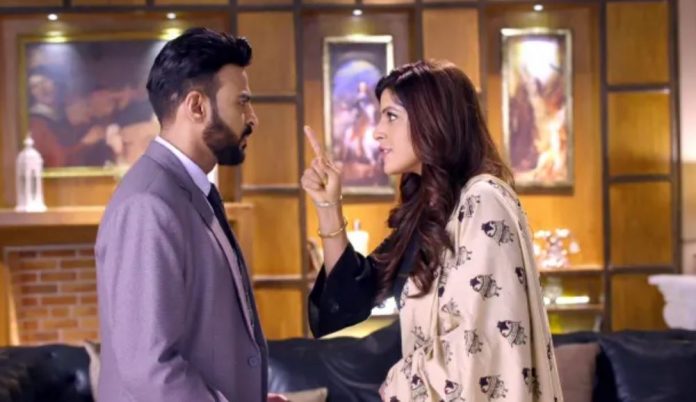 Yeh Hai Mohabbatein Natasha Arijit plan new evil The family encourages Raman and asks him to trust himself as they trust him. Ishita tells him that he shouldn’t self-doubt. Raman clears his mind. He gets busy with Karan and Ruhi’s marriage arrangements. He also wants to secure his family’s happiness. He promises that he won’t be sad from now on. He cheers them up. Ishita gets delighted watching her family happy and peaceful after a long time. She likes the view of their smiling faces and wants things to always stay the same. Karan and Ruhi suggest the arrangements and wishes they have for their wishes. Meanwhile, Natasha fumes on Arijit for not validating the reports beforehand.

She blames Arijit for failing her plans. Arijit can’t believe that Raman’s identity got proved in the DNA test. He wants to know why did the lab technician cheat him even after taking a hefty amount. He finds out and learns about Sunil taking the police to the lab for reports collection. He feels Sunil has made a big mistake and hit on his own leg by doing this. He tells Natasha that her brother has spoiled everything and she better control her madness. Natasha loses her cool and gets mad to get Shardul.

Natasha asks him to find some way that she gets Shardul back. Arijit assures her that he also wants to ruin Bhallas. He wants to send her to Bhalla family. Ishita and family find Raman too upset. They want to bring happiness in Raman’s life again. They know Raman is dealing with a lot of problems because of Natasha. Arijit tries to make new arrangements to help Natasha. Natasha tells Sunil that she doesn’t love Shardul and left him by her wish. She reveals about her diamond smuggling crime.

She tells Sunil that she had put the diamonds in a locker protected by Shardul’s face lock. She wants to get the diamonds back. She wants to use Raman’s face to unlock the locker. She gets determined to get the costly diamonds. Sunil gets happy to know about the diamonds. He promises to help her get the diamonds back. Natasha doesn’t have any feelings for Shardul. She just wants to get rich. Arijit helps her with his new plan. Shagun returns home and gets to meet Raman. She doesn’t identify him first. After knowing the complete tale, she believes Raman. The family gets ahead with Raman and Ishita’s efforts.

Natasha intervenes again with her claims that Raman is Shardul. She tells them that she wants her husband back. Raman tells her that he isn’t her husband, but she doesn’t show faith. She tells him that she has come to occupy the flat next to theirs. She wants to irritate them and find a chance to kidnap Raman so that she can unlock the diamonds safe. Sudha and Shagun help Bhallas to get rid of Natasha. Natasha feigns a drama again to get Raman’s sympathy.