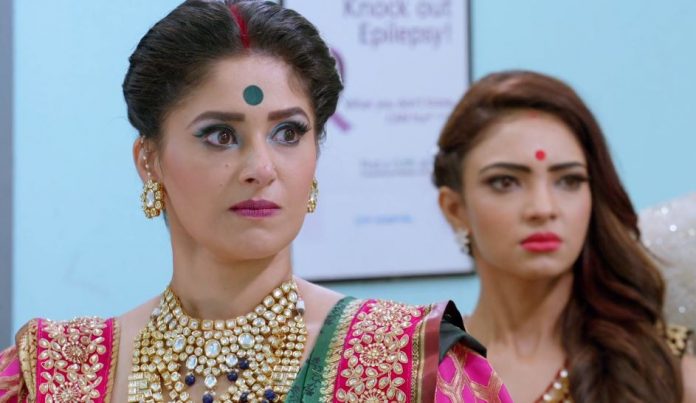 Kasautii Huge drama to break up AnuPre forever Mohini gets insulting Mr. Bajaj and Prerna for being so evil to kill people and their emotions. She tells them that they don’t deserve anyone in their lives, they both suit each other, being criminals themselves. Prerna knows Mohini’s anger is justified, as Mr. Bajaj had committed Anurag’s accident and left him to die on the roads. She stays numb and bears the humiliation, while Mr. Bajaj gives it back to Mohini. He takes a stand for his wife. He opposes Mohini strongly.

He tells Mohini that Prerna had come to see Anurag, since she wishes for his quick recovery. He praises Prerna for having a good heart filled with love and care for others. He asks Mohini to know Prerna well before judging her. Mohini gets tempered up when Mr. Bajaj admits his mistake of hitting Anurag by his car. She finds him very shameless. He tells her that he won’t bear his misbehavior. He accepts his mistake and apologizes. Nivedita asks him if Anurag will get fine by his apology. He gets rude in his speech.

Basus get angry that he had done a crime and now threatening them. They call the cops to get him arrested. Mr. Bajaj uses his smartness and reports the accident to the police. The police favors him since he didn’t escape from the blames. Mohini asks the cops to arrest Mr. Bajaj by taking Shivani’s statement. Mr. Bajaj is ready to help the cops. Shivani gives her statement to them. She tells them that she didn’t see the accident happened and just heard it from the people. When there is no proof against Mr. Bajaj, he doesn’t get arrested. Nivedita scolds the cops for favoring Mr. Bajaj because he is rich and influential.

Mr. Bajaj tells Prerna that he will face the punishment if the law finds him guilty. Prerna supports him. Mohini develops more hatred for Prerna. She insists the doctors and gets Anurag home. She continues his medical treatment. Moloy breaks down on seeing Anurag. When Anurag’s state gets worse, the family get worried. Maasi tells Tanvi about her next plan to make Prerna away from Anurag, so that Prerna gets compelled by her heart to leave Mr. Bajaj and go back to Anurag. Maasi explains Prerna that she should be away from Anurag and his family.

She also explains Mr. Bajaj that Prerna and Anurag should be away, before they lose their name and reputation. She asks him to kick out Basus from the house to get revenge and also bring Prerna to senses, since her duty is to just look after his daughter. She asks Mr. Bajaj to take some action soon. He falls in her words. Prerna learns that Anurag is critical and may slip in coma if he doesn’t break his unconsciousness. She fears to lose him forever.

She sheds tears recalling the moments spent with her love Anurag. She wants to revive Anurag to life. She expresses her feelings for Anurag to Mr. Bajaj. Maasi makes new plans to get Tanvi and Anurag together, so that Prerna loses her love.