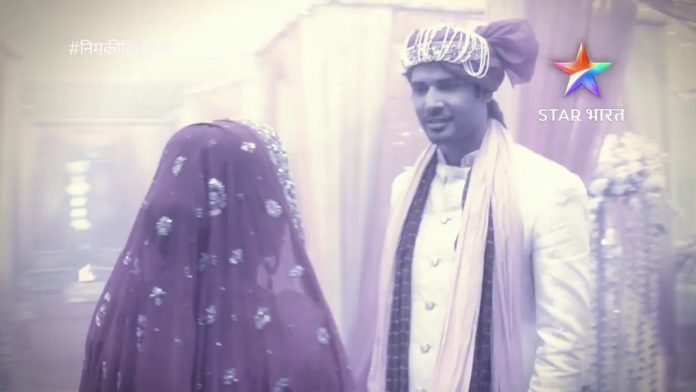 Nimki Vidhayak Mintu Singh shocking dramatic meet Mishra looks for Radhika. Nimki is with Radhika. She asks Radhika is she is sure about her lover. She tells her that she also fell in love and was desperate to marry him, but her husband wasn’t a good man. Radhika tells her that she shouldn’t worry for her. Radhika tells Ashish that she is with Nimki Vidhayak. Mintu learns this. He talks to Nimki. He asks her is she the same minister who were making fake promises to the people. She tells him that she wanted to thank him for saving Anaro, but now she won’t thank him. They both have a cute argument on the phone. Ashish and Radhika stop their fight. Nimki takes Radhika for the mass marriage.

She tells Radhika that there won’t be any biasing about caste here. Radhika doesn’t think so. Nimki thinks if people like Tetar are everywhere in the country. Mintu rushes Ashish to the venue to get him married to Radhika. Mishra looks for Radhika and goes mad in anger. Radhika hides from Mishri and goons, who arrive the same place to check once. Mintu sends Ashish to get ready for the marriage. Nimki accompanies Radhika. She sees Radhika decking up as the bride. She recalls her marriage with Babbu Singh. She gets emotional. Mintu asks Ashish to always keep Radhika happy, since its their love marriage. He asks Ashish to never disrespect his wife.

Ashish agrees to all his tips. Nimki also gives advice to Radhika. She asks Radhika not to treat her husband as Lord, but a life partner. She asks Radhika not to let her husband disrespect her. Radhika goes to the hall for taking her place in the marriage mandap. She gets scared seeing Mishra. Ashish also worries that Mishra will kill him. Ashish and Radhika try to cheat Mishra by hiding. They pose Mintu and Nimku as the marrying couple. Nimki takes the bridal look to save Radhika from Mishra’s sight. Nimki gets a huge shock on seeing Mintu as her groom, which makes her slip in back memories of her husband Babbu.