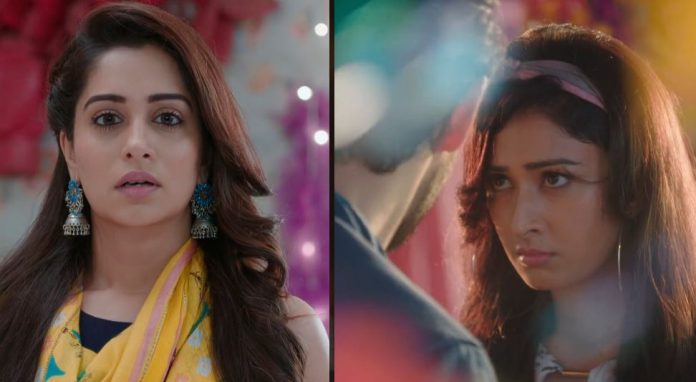 Kahaan Hum Sonakshi Raima connection to reveal Sonakshi gets drunken Pari home which shocks Suman. Suman didn’t expect Pari to ruin her name this way. She has big expectations from Pari. She wants Pari to answer her questions. Pari doesn’t name Rohan. Rohan is worried that his affair news will reach Rohit, which will upset the whole family. He doesn’t want Tanya to know anything. Rohit meets Rohan and shares his complicated confusion about Sonakshi. He tells Rohan that he is much confused about his feelings. He shares his problems. Rohan also shares similar problem. He feels Pari may land him in trouble. Suman shows her wrath upon Pari. Pari stops Suman from slapping her. She asks Suman not to assume her Sonakshi and control her.

She tells Suman that she isn’t Sonakshi to obey her always. Suman regrets hearing Pari’s bitter words. Rohit faces his alter ego, who makes him realize his love for Sonakshi. Rohit really thinks that its time to move on. He gets happy realizing his feelings for Sonakshi. Suman is worried about Pari. She tells Sonakshi that Pari can never be responsible and good-natured like her. She fears that Pari will never take up Sonakshi’s responsibilities. Sonakshi tells her that she will marry a guy who understands her responsibilities. Suman questions her if she wants to marry Rohit. Sonakshi is heartbroken and has no answer.

Suman asks her to end the drama if her love isn’t mutual. She tells Sonakshi that Rohit may not love her and one-sided love is always painful. She advises Sonakshi to get away from Rohit’s life so that she doesn’t break down further. Sonakshi decides to end the drama and also distance herself from Rohit. Raima recalls her beautiful past with Rohit. Nishi is going abroad for a conference. She leaves Pooja’s responsibility to Rohit. Nishi gets emotional when she bids a farewell to her family. Veena gets happy knowing Rohit is moving on.

Sonakshi wants to meet Rohit and end the fake love drama soon. She gets another trouble when Pulkit tells her that he wants to complete his internship under Rohit. Sonakshi doesn’t want him to work with Rohit, to break their terms. She takes him to another hospital, where Raima is admitted. Raima reacts on seeing Sonakshi and breaks her silence.