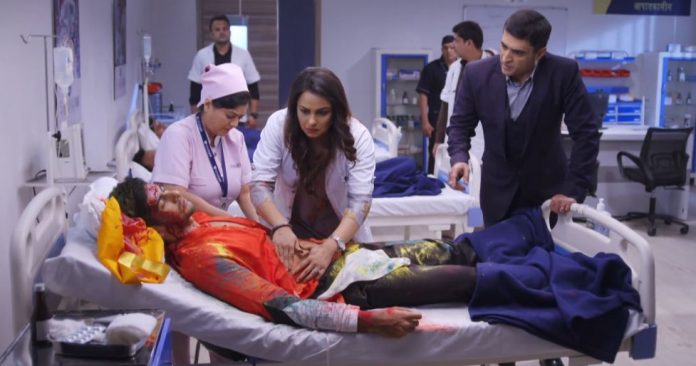 Sanjivani Shashank Sid relation reveals; Ishani’s Loveria next Ishani is worried for Sid’s critical state. She gets broken down. Shashank and Juhi learn the shocking news. Shashank breaks down seeing Sid, since he is emotionally attached with Sid. Juhi stays strong and promises Ishani and Shashank that she will save Sid’s life. She doesn’t want them to assist her in the surgery. She feels that Shashank will lose it if he sees Sid in this state. She wants Shashank to stay out. Shashank doesn’t get any entry in the Operation theatre, just like Ishani. Ishani feels guilty that she is behind Sid’s state.

Ishani tells Juhi that everything happened because of her, since Sid got injured in an attempt to save her. Ishani sinks in sorrow. Shashank can’t manage his emotions with this sight. Sid’s mum doesn’t see Shashank at first. She then learns about Shashank’s presence and gets away. She hides from Shashank, and also expresses her sorrow through tears. She conceals her relationship with Shashank. She cries for her son. She feels proud of Sid, who has risked his life and everything in order to save Ishani.

She feels Sid can do anything to help others. She hugs Ishani and shares her sorrow. She doesn’t blame Ishani for anything, which gives a relief to the later. Ishani wants to go to Sid. She doesn’t get access to the Operation Theatre. She expresses her sorrow over her parents’ loss. She cries that Sid means a lot to her, he is her friend, who she never wants to lose. She wants Sid to stay fine always. She feels the world didn’t accept her, but Sid never judged her. She recalls the way Sid has saved her.

She knows Sanjivani needs a talented doctor like Sid. She wants Sid to get fine and serve humanity again. She knows his intentions are right. She meets Shashank and cries out her sorrow. Shashank consoles her. He tells her that he will save Sid at any cost. With his promise, Ishani gets a new relief. She stays tensed to know the surgery results. The doctors of Sanjivani to know about Sid. Vardaan wishes Sid survives and resumes his work, since Sid is a gem. Rishabh wants Sid to die. He hates Sid so much. Vardaan scolds Rishabh for thinking evil for Sid. Rishabh’s dad also gives some sense to Rishabh. Ishani is worried and wants to know about Sid. Juhi performs the surgery alone. She cures Sid.

She finishes the surgery. She faces everyone and wants to give them the good news that Sid is stable. Ishani learns Sid is recovering. She realizes Sid’s worth and thinks if she has fallen in love with Sid. Ishani undergoes the critical Loveria. The diagnosis genius Ishani studies her symptoms and diagnoses that she is in love with Sid. On the other hand, a major twist will be unfolding with a big revelation that Sid is Shashank’s illegitimate son. Shashank feels fatherly emotions for Sid, unaware of their real connection. After Juhi’s chapter, this new twist would complicate Shashank’s life further. What will happen when Sid learns the truth? Keep reading.