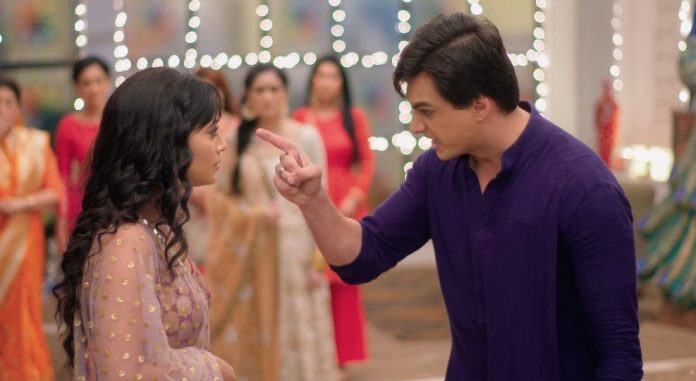 YRKKH Upcoming big confrontation and twists Kairav and Vansh present a lovely skit and tell everyone about Ganesh worshipping his parents, who meant a universe for him. Kairav tells them that he loves his parents a lot. He wants both his parents. Kartik gets emotional and wants Kairav with him always. Kartik performs the Visarjan. Kairav and Vansh play with water and get their costumes drenched. Naira asks them to go and change their clothes before they catch cold. Kairav wants Kartik and Naira to be together. Vedika feels out of place again. Naira tells the family that Ganpati has gone and now its her turn to leave the family.

She tells them that relations have got disturbed because of Naira, so its time that she takes her son away from them. She wants them to resume their normal life. She doesn’t reveal that Vedika has a problem with her and wants her to leave. She doesn’t tell anything about Vedika and her bitter argument. She just tells them that she can’t stay in the same house, where Kartik will be living with his wife, since Kairav may see them together and start questioning. She knows its tough to tell Kairav about Kartik’s second marriage with Vedika, but leaves things on fate and time.

She wants to break the truth to Kairav when he is able to take it. She doesn’t want to upset Kairav or give him a tough choice. Dadi tells Naira that they got much attached to Kairav and can’t live without him. Dadi understands that Naira’s decision is right, since its concerning Vedika as well. She doesn’t know how the situation is changing. She regrets for seeing such a day. She tells Naira that she is aware that Naira can’t stay with them, but don’t want to lose Kairav. Naira explains them the scenario where staying back would mean injustice with other relations. She indirectly explains that her presence is hurting Vedika.

Kartik gets angered that Naira took the decision herself again and didn’t think once about him. He tells her that Kairav won’t go away from him, since Kairav is his son. He doesn’t want to lose his son. He warns Naira against snatching Kairav. Naira clears out to him that there is no other option, since Kartik has to move on in life and his marriage with Vedika. She doesn’t want to complicate his life. She asks him to understand that his second wife won’t be able to take Kairav’s responsibility. She tells Kartik that they have to be practical and think of Kairav’s betterment first. She tells that she doesn’t want to put Kairav in a fix by asking him to choose either of his parents.

She hopes Kartik understands her, but he doesn’t. Kartik gets emotionally down and stops her from leaving, shocking Vedika. Kartik doesn’t want Naira and Kairav to leave. Naira tells him that she can’t leave her son with Kartik alone, since she is equally important for her son. Kartik realizes everything, but still warns her against leaving the house. Vedika feels Kartik’s heart is connecting with Naira again.

Naira wants Kartik and Goenkas to keep meeting Kairav and Singhanias. Kartik doesn’t want Naira to walk out, but Naira doesn’t listen to him. Kartik unwillingly agrees to Naira for Kairav’s sake. Kartik meets them at Singhania house and gets happy. He finds Vedika spying. Vedika confronts Kartik for welcoming his ex-wife back in his life. She feels Kartik doesn’t intend to work out their marriage. Vedika clears out that she will never accept Naira in their lives.