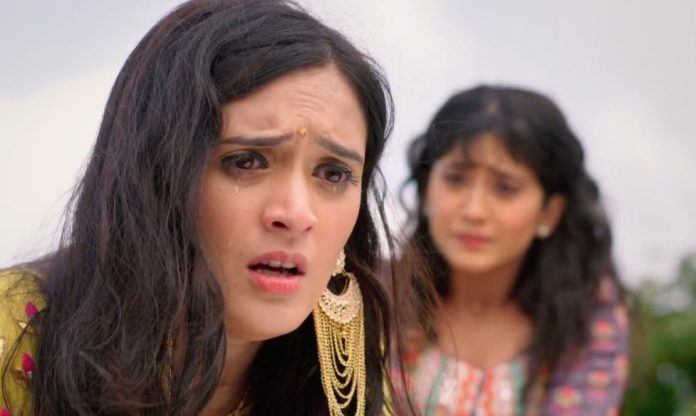 Kartik Naira react on Vedika’s suicide move Kartik and Naira enjoy the praises they have received at Kairav’s school. They happily come home planning Kairav’s shopping for his new school accessories. Kartik wants Kairav to buy anything he wants. Naira just wants to get the needful things. Vedika finds them smiling and very much together. She fears of Pallavi’s warnings, that her marriage will get void and Naira will return in Kartik’s life. She loses her cool when she finds Kartik forgetting her. She asks Kairav to talk to Vansh. Kairav shares about his admission.

Vedika realizes that Kartik has gone for the school admission, but doesn’t cool her anger. She tells Kartik that she will confront him in Kairav’s absence so that she doesn’t get blamed for breaking his heart. Kartik wants her to stop creating a drama in Naira’s house. Vedika doesn’t think she will find him anywhere else than Naira’s house. She tells him that they can’t talk at Goenka mansion, since he is changing his residence quite often.

After the taunts, she comes to the point and confronts him for spending time with Naira by using Kairav. This shocks Kartik and Naira. The family leaves Kartik and his wife alone the talk.

Naira is worried that Kairav may come back and hear the truth that Vedika is Kartik’s wife. She guards at the door to stop Kairav, while hearing the heated argument between Kartik and Vedika. Vedika confronts Kartik for always being with Naira and bringing her between to break his second marriage. She accuses him for doing this intentionally. She tells that both Kartik and Naira want to reconcile on the pretext of Kairav. Kartik reprimands her for her thinking, though he has this wish in his heart to unite with Naira.

Vedika tells him that Naira will be blamed for breaking their newly formed relation. He asks Vedika to decide anything as per her thinking. Vedika breaks down. She finds her car locked and runs on the road. Naira feels Vedika is emotionally shattered and may take any wrong move. She runs to save Vedika, and her doubt gets certain when she finds Vedika committing suicide. She stops Vedika from this mad move in nick of the time. She wants Vedika to value her life. She promises to help her out. Vedika asks Naira to get divorced from Kartik.

Naira agrees to her condition. She wants to fix Kartik and Vedika’s spoiled relation. Naira agrees to divorce Kartik, which shocks him. Kartik learns about Vedika’s suicide move and feels guilty for the same. He doesn’t want to do wrong with her. Kartik will be fighting for Kairav’s custody as a reply to Naira’s divorce move.