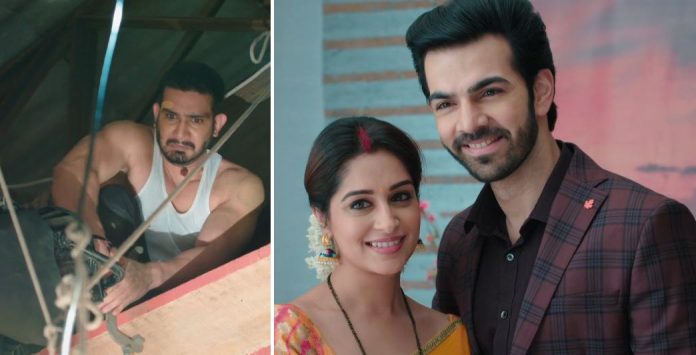 Kahaan Hum Psycho lover attacks Rohit Hinders marriage The psycho lover of Sonakshi wants to meet her. He lives with his wife and son. He isn’t taken good care of. His wife doesn’t care for his wound. She gets mad at him that he is still running after Sonakshi. The man just wants Sonakshi, since her image of Parvati as the perfect wife has entered his life. He is an unhappy soul. He feels just Sonakshi aka Parvati can bring happiness for him. Naren isn’t happy that Rohit is going to marry an actress. He tells Rohit that Sonakshi doesn’t belong to their class. Naren gets miffed by the media attention. He never wanted to get the media at his gate, asking about his son’s relation with a tv actress. Rohit too doesn’t enjoy being in the limelight.

He wonders who has leaked the news of his alliance fixing in the media. He doesn’t want uninvited attention by the media. He wants Yash and Ajit to make the media away from the house. Rohit tries hard to avoid Naren. He is upset with Naren, knowing the truth that Naren had an affair and cheated Veena. Naren expresses his dislike towards Sonakshi’s profession. He accepts that she is a nice person, but may not be quitting her tv career to marry Rohit. He wants Rohit not to marry Sonakshi. Rohit gets angered on Naren, not for qualifying to be a good husband and lecturing others on relationships.

Naren tells Rohit that Sonakshi may not be able to keep the marriage. Rohit tells him that Sonakshi values relations better than him, she knows the value of loyalty, she has proved her honesty to them as well. He feels that Naren needs lessons of life than commenting on others. He threatens to expose Naren’s truth if he says a word against Sonakshi. Naren is hell bent to reject Sonakshi. Suman is happy to meet Sippys to talk about the alliance. Suman meets Naren and doesn’t learn his annoyance over the marriage. She doesn’t want anyone’s bad sight to affect Sonakshi’s happiness. The psycho gets Sonakshi’s picture, after a bitter argument with his wife.

His life and background get known. The poor man dreams big of marrying Sonakshi. Veena tells Sukhmani that Naren has a problem with Rohit and Sonakshi’s alliance. Veena asks Sukhmani to convince Naren. Suman meets them to fix the marriage date. The pandit gives them two possible dates. Sippys and Suman don’t want to rush with the marriage. Sukhmani decides to keep the marriage soon, so that there is no new troubles for them.

Elsewhere, Rohit meets Netra to assure her that she will take the final call when he reveals the marriage dates. He wants Netra to free Sonakshi from work. He also wants Netra to not suffer any loss because of the marriage. He wants to make adjustments that work for both the parties. Netra gets honoured when he shows so much understanding. Sumit and Raima break the news that they have informed the media about the alliance formation so that marriage gets a close date. Rohit laughs off on Raima’s madness. Rohit and Sonakshi spend time on her sets.

The crew congratulates them for the date fix. The psycho guy witnesses Sonakshi’s happiness with Rohit. He makes a move to leave Rohit injured. He makes the lights fall over Rohit. Rohit luckily gets saved. Rohit doesn’t know how did the accident happen. Netra asks the assistant to find out the culprit.