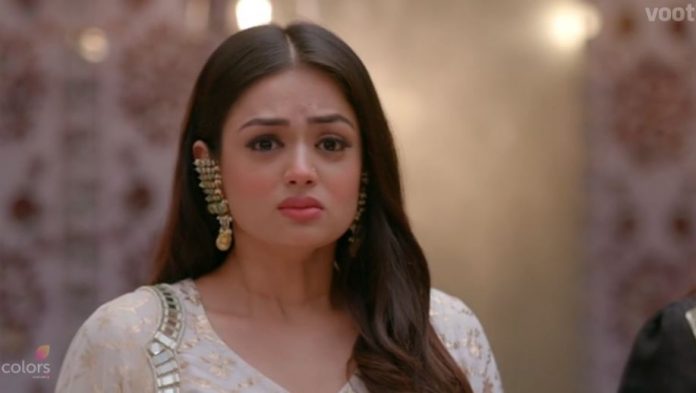 Tellyreviews Top Spoilers Hits Today Sufiyana Pyaar Mera: Saltanat upsets Zaroon by deciding to celebrate Diwali with Madhav and his family. He tells her that he has no objection with her friendship with Madhav. He doesn’t want to lose her. He wanted her to ask him once before declaring anything randomly. He expresses his annoyance to her. She apologizes to him. Zaroon hugs her. He doesn’t hold annoyance for long. Madhav thanks them for their efforts. Zaroon gets busy in arrangements for the festive. Madhav gets inclined towards Saltanat.

Choti Sardaarni:
Param asks Sarabjeet about Meher. He wants his mother back. Sarabjeet covers up for Meher’s absence. Param gets much dejected when he doesn’t find Meher for long time. Sarabjeet can’t tell him that Meher has gone to stay with her family. Meher too misses Param and decides to meet him.

Yeh Rishta Kya Kehlata Hai:
Naira invites Kartik home for Kairav’s birthday party. Kartik gets too delighted when he gets the invite. He wants to meet Naira and Kairav. He is thankful that the custody case did good for them, it didn’t break Kairav’s heart. He shares his happiness with his family. He tells them that he can meet Kairav, Naira won’t pose any hurdles from now. He isn’t aware that Naira was helpless because of Vedika. Singhanias are happy that Naira won the custody and didn’t lose her child.

Bahu Begum:
Azaan and Shayra spend romantic time. Ghazala can’t see them happy. She leaves Shayra disturbed by telling her about Noor. She tries to mislead Shayra. Shayra doesn’t want to doubt Noor. Ghazala is trying hard to break the uniting between Shayra and Noor.

Muskaan:
Ronak enjoys his haldi ceremony. Muskaan and Gayatri fall in trouble. They get caught by the thieves. Ronak goes to call them for the haldi. He finds them in trouble. He saves them by beating the thieves. Sir ji worries that Ronak will beat the thieves and fall his plans. Sir ji falls down when the bandage gets stuck in the wheelchair. Ronak and Muskaan take him to the hospital for his aide. Ronak gets Muskaan home for the haldi ceremony. Muskaan is happy that their dreams are getting fulfilled. Muskaan also enjoys the family’s love in the haldi ceremony.

Ronak relieves Muskaan from the challenge. Muskaan wants to fulfill his wish by wearing the gifted dress. Sir ji tells his aides that he is fine, he just did the drama to get saved from Ronak. Muskaan fulfills Ronak’s wish. They spend romantic time. Lovely tells Sir ji that she can’t see Muskaan happy. Sir ji helps her in ruining Muskaan’s life. He asks her to target Muskaan to stop the marriage.