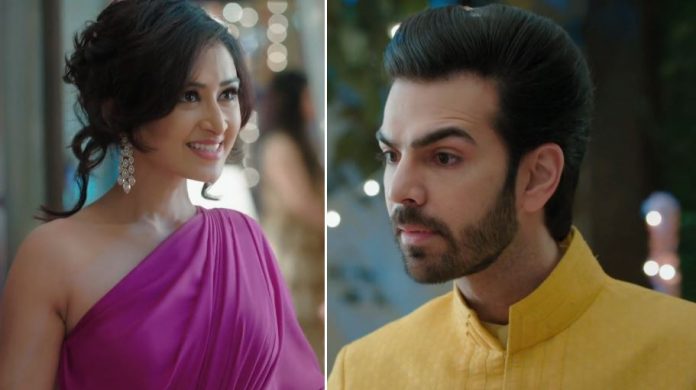 Kahaan Hum Love Insecurity Surprise Madness Twists Rohan is worried that Deepa can expose his truth. He wants to make sure that Deepa fails in her plan. He meets Deepa and tricks her. He deletes the evidence from her phone. Rohan gets back to his mean ways. She wants to teach him a lesson. Suman wishes everything to go fine. She wishes Sonakshi’s happiness. She compliments Pari’s stunning look. Rohan advises Pari to avoid Deepa, who may mess up with them in the party. Pari wants Rohan at any cost. She isn’t scared that her affair will get known and may harm Rohit and Sonakshi’s relationship also. She wants to look better than Tanya. Rohit likes Sonakshi’s choice of clothes.

He awaits Sonakshi. Sonakshi quickly wraps up the shoot. Netra and Sumit ask her to go quickly. Sonakshi gets decked up and plans a surprise for Rohit. Tanya comes across Mahesh. Mahesh fakes an accident and fools her. Tanya gets scared of police. She takes him home for treatment. Meanwhile, everyone enjoys the function. They compliment Rohit for his designer outfit. Veena tells him that he has to keep his relationship with love, without getting any doubt or annoyance in between. She asks him not to make the marriage a compromise.

He promises her that he will always keep Sonakshi happy. Mahesh is angry when he sees Rohit. Tanya asks Rohit to check Mahesh and treat his wound. Rohit treats Mahesh. He asks Tanya not to panic, there is no serious injury. Mahesh wants to hurt Rohit. Veena reaches there and Mahesh’s plan fails. Veena takes Rohit with him. Sippys welcome Rastogis. Everyone looks stunning in their outfits. Suman tells Rohit that his outfit is sponsored. Pooja finds it weird. Pooja doesn’t react much. Rohit wants Sonakshi to come soon. Naren is angered on Sonakshi’s attitude. He tells Yash that Sonakshi is late in her own function.

He feels his decision for Rohit is right. Yash also gets confused. Raima gets Rohit’s attention. Suman gets angry seeing Raima. She doesn’t want Sonakshi to give much freedom to Raima. Suman feels insecure. She thinks where is Sonakshi. Sonakshi gets stuck in the traffic jam. She wants to reach Rohit soon. Mahesh plans to go out and see Sonakshi. He takes advantage of darkness to reach her. Sonakshi performs on a filmi song in Madhuri’s avatar just to surprise Rohit.

Sonakshi gives the best gift to Rohit. He hugs her and tells her that she isn’t less than Madhuri for him. He tells that she really got Madhuri by her performance. Sonakshi proves her talent. She also fulfills her duty. She tells Rohit that she has to keep his wish. Veena blesses Sonakshi. She finds Rohit lucky to get such a girl. Sonakshi’s stunning performance wins applaud, but Naren gets displeased.

He feels the family is getting dramatic because of the actress’ entry. He doesn’t want such surprises. Sippys praise Sonakshi. Naren doesn’t like Sonakshi’s profession. He keeps silence and moves out. Sonakshi stops Rohit from arguing with Naren. She wants to give time to Naren to accept her as his Bahu. Mahesh hinders Sonakshi and Rohit’s moment. He takes Rohit’s place to get close to her. There will be many twists because of Sonakshi’s psycho lover.