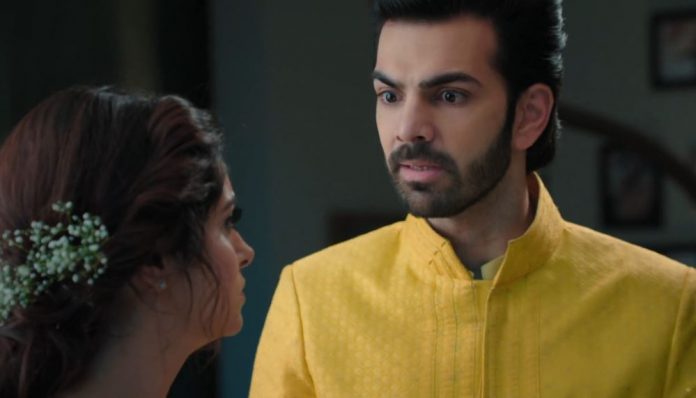 Kahaan Hum Stalker shocks Rohit Sonakshi Rohit proves his true love for Sonakshi. She is still much tensed about the incident. Rohit tells her that she is really a celebrity that fans are stalking her. He tells that its really good to have loving fans. He assures her that he loves her a lot and will protect her round the clock. He lightens her mood by telling her about Veena, the lady who stalked him in his college. He tells that Sukhmani saved him from Veena’s stalking love. He cheers up Sonakshi.

He tells Sonakshi that she shouldn’t get scared. She is afraid that someone may ruin their happiness. He tells her that none can come between them, they were destined to meet. Sonakshi’s harassment news goes viral. Naren gets miffed when he finds the media outside his house, making all sorts of news about Sonakshi. He didn’t wish his family name to get dragged in any scandal. The media also doesn’t leave any chance and target Sippy family for not providing security to a celebrity like Sonakshi. Rohit doesn’t care by the sudden arrival of reporters. He makes his way out of the crowd.

Sonakshi is worried that Rohit would be facing Naren’s wrath. She tells him that she didn’t wish the media to trouble the Sippys. She apologizes to him. She tells him that he should explain Naren. Rohit relieves her from tensions. He tells her that he is just seeing the good side, he has also become a superstar now. He goes to her set to meet her and surprise. Rohan and Tanya get the news of her pregnancy. They share it with the family. They celebrate the good news. Rohit becomes Sonakshi’s bodyguard. He walks behind like her shadow. He keeps his promise to never leave her alone. She gets surprised when she finds him at her service.

She asks him to manage his own work. He tells her that his absence can be covered up at the hospital, but he wants to be with her at this moment. Their true love gets applauded. Rohit and Sonakshi cut the cake together. Mahesh turns angry seeing them happy. Rohit gets upset when the police blames Ravi for the theft. Mahesh frames Ravi. Police gets the engagement ring from Ravi. Sonakshi and Rohit believe Ravi. Rohit finds something suspicious and comes up with an idea. He slaps Ravi and plays the drama to catch the culprit. Rohit learns that Mahesh is the stalker. He gets angered and wants to catch him.

Consequently, Mahesh follows Sonakshi once again and gets more daring. Mahesh gets overconfident that Rohit won’t be searching for the culprit. Rohit observes Mahesh’s doings. He concludes that Mahesh is the stalker and informs the police. Mahesh wants to kidnap Sonakshi and forcefully marry her. He dreams of a wife, ideal like Parvati. He gets too obsessed with Parvati and doesn’t realize that Sonakshi has her own life, than just playing the perfect wife Parvati. Will Rohit be able to save Sonakshi? Keep reading to know more about Rohit and Sonakshi’s wedding sequence.